Fraud Will Rise Again (And 10 Other Predictions for 2019) 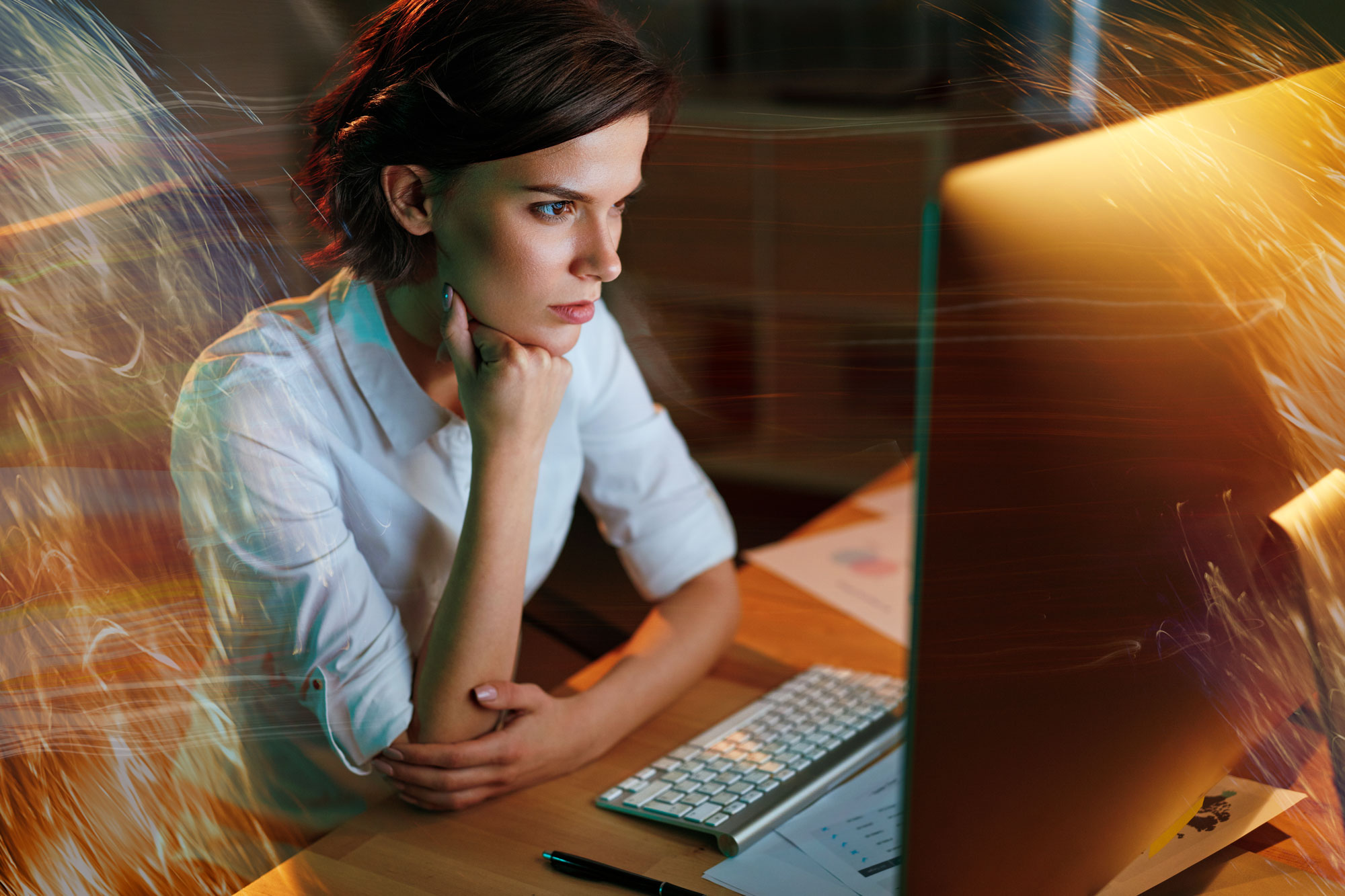 2019 has arrived and you know what that means – it’s prediction time again.  January is always a good time to look at what might be in store for the coming year so you can plan your strategies.

Most of Our Predictions Last Year Were on Target

Last year, Global Fraud Fighter Maryann Miller and I collaborated to create a Top 10 Fraud Trends for 2018.  We got a lot of predictions right.

2018 was a great year to be a fraud practitioner.  As fraud grows, the demand for good fraud investigators, fraud analysts, data scientists and fraud managers increases.

To answer that question, I reached out again to Maryann Miller and asked her if she wanted to come up with another list for the new year.   She agreed and here is what we came up with. 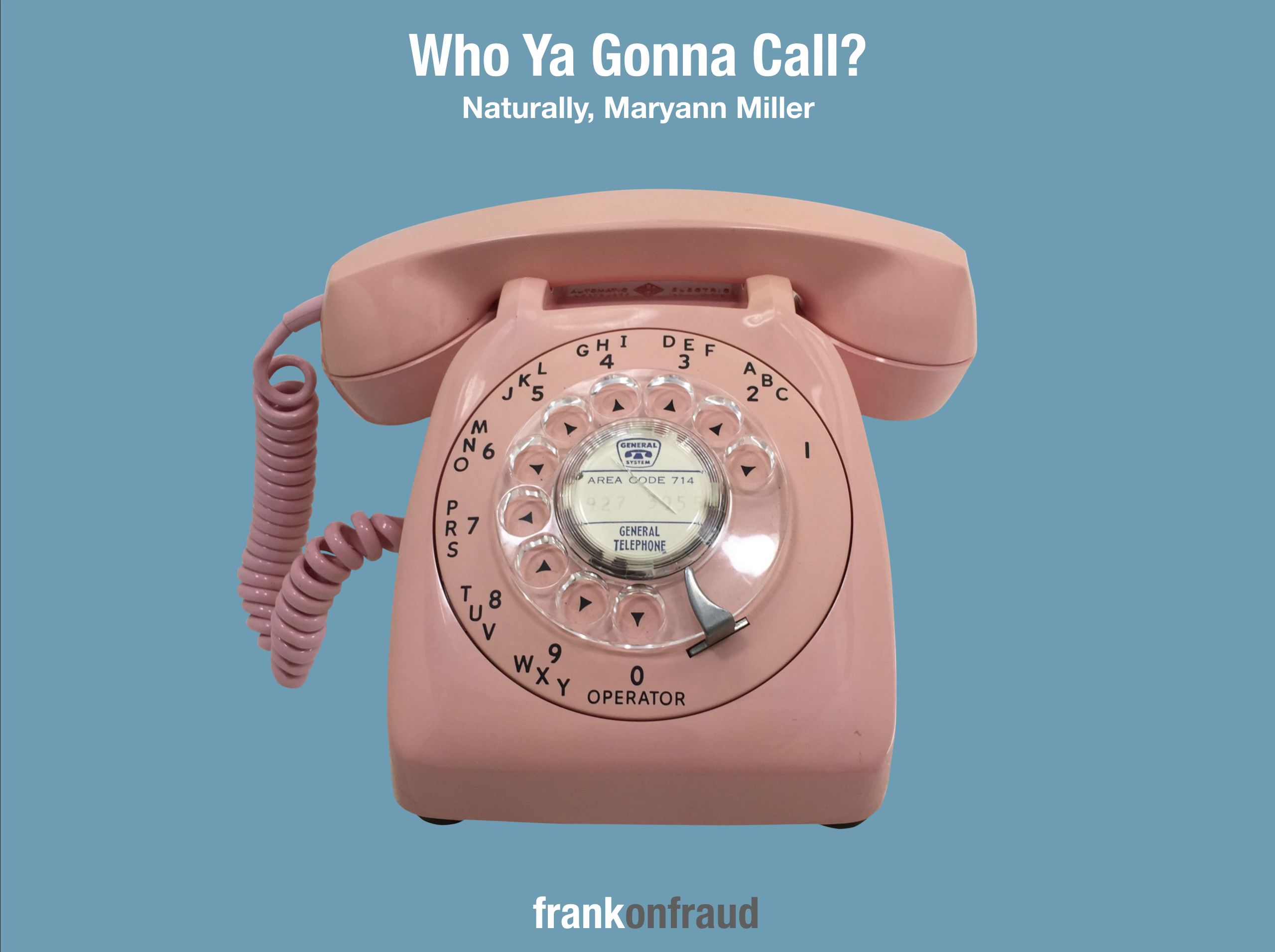 Banks are abandoning their fax machines and darkened copies of drivers licenses, passports, and social security cards and opting in for digital document verification.

Companies including Mitek, ID Analytics, IDology, and Jumio, are leading the efforts to transform the industry in this space.  In 2019, digital document verification will become a key component in the new account opening process for banks and lenders. 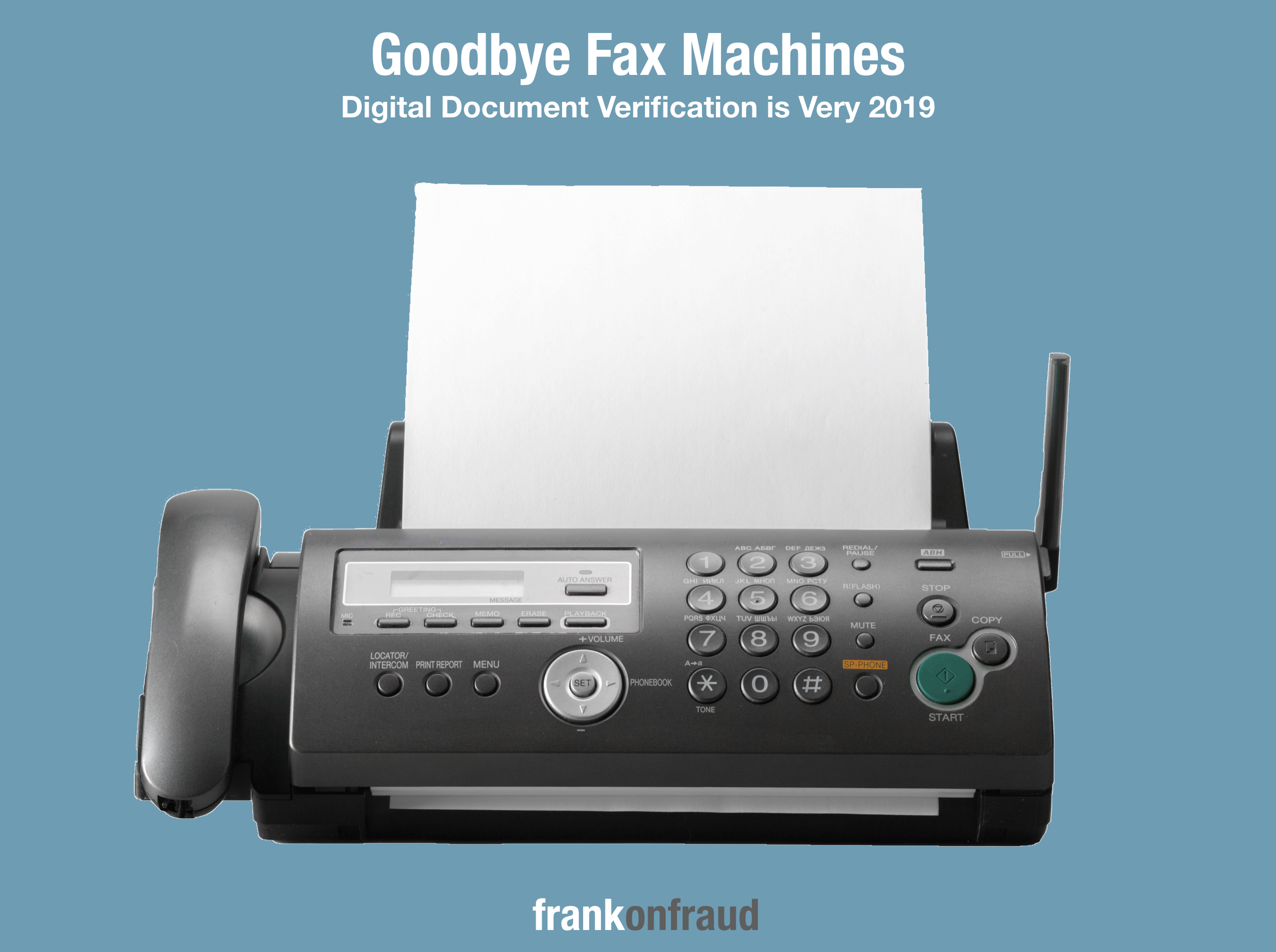 Machine Learning and Artificial Intelligence were the fraud buzzwords of 2018 and for good reason – the techniques have proven to be highly successful in combating fraud with the growing amount of data banks are collecting.

Leading-edge banks are looking to become more collaborative in the fraud scoring and modeling process.  This is primarily due to the large increase in the number of data scientists and the fact that banks have finally begun to capture and retain huge data stores of their own fraud data.

Companies like Feedzai and Simility have responded by giving these banks tools to rapidly deploy their own models.  In 2019, we expect more banks will add self-service AI to their strategic roadmaps and make investments in this type of technology. 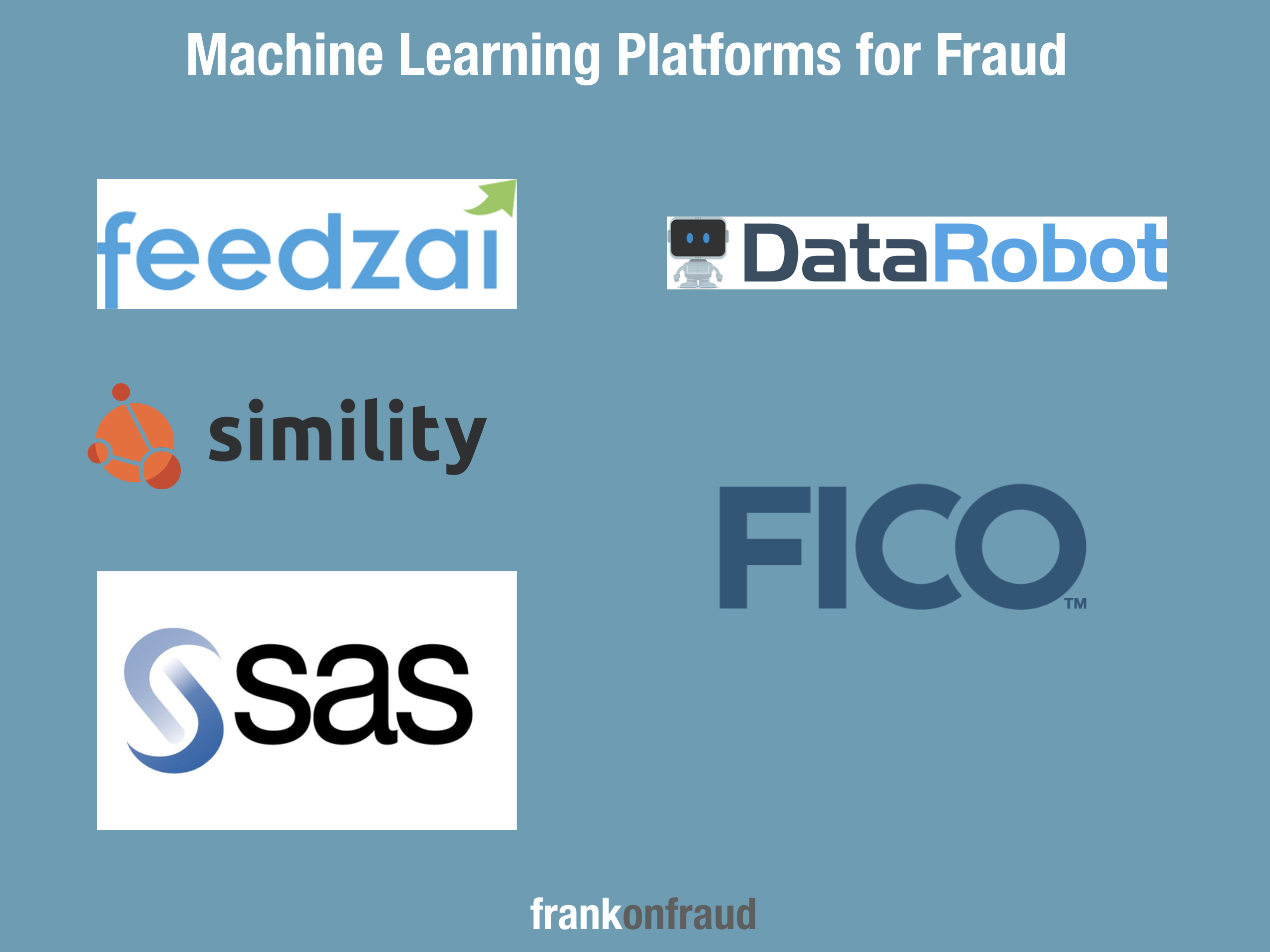 There is a powerful ally in the fight against fraud and it is the consumer. In 2019, banks and lenders will capitalize on this and shift their focus to enlisting consumers in the process of verification and validation.

Bank Statement Consent – Companies like Yodlee, FormFree, DecisionLogic and TurboPass enable consumers to give consent for their bank statements to be downloaded by lenders and banks to verify their employment, income and bank accounts.

Utility Bill Consent – New companies like Urjanet are enabling consumers to give access to their utility bills for verification of identity and proof of residence.

Banks and lenders will transform their verification processes to use these tools to streamline their underwriting and new account processes. 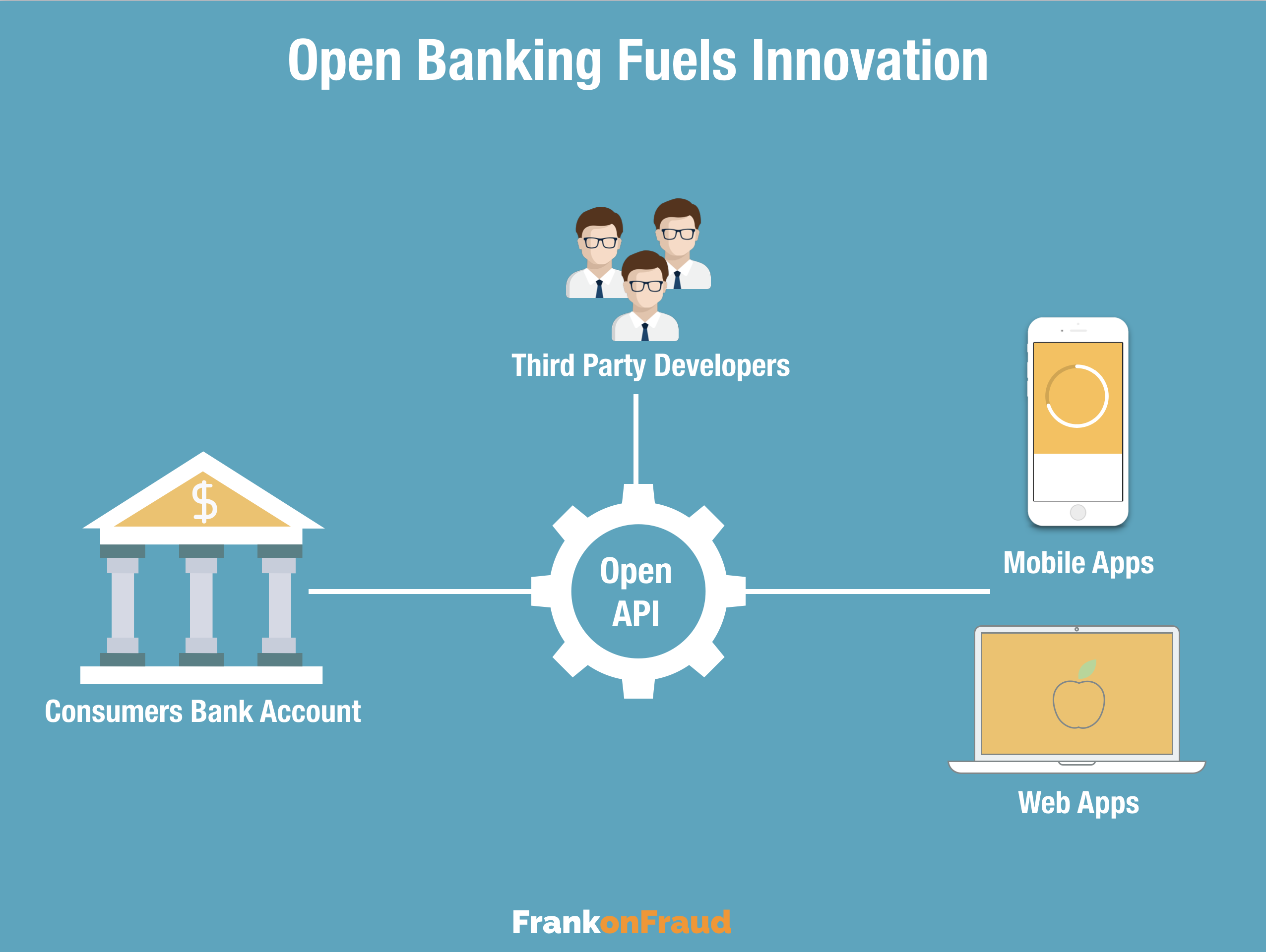 Mortgage fraud is on the rise and it has been for a few years now. According to CoreLogic, the data and analytics company that produces the National Fraud Index, mortgage risk reached its highest level in 2017 since the meltdown in 2009.  Their projections are based on millions of submitted applications annually.

For 2019, that trend shows no signs of slowing down.  Mortgage lenders and banks should be prepared for the risk of fraud to be 1% (100 basis points) of all their applications. 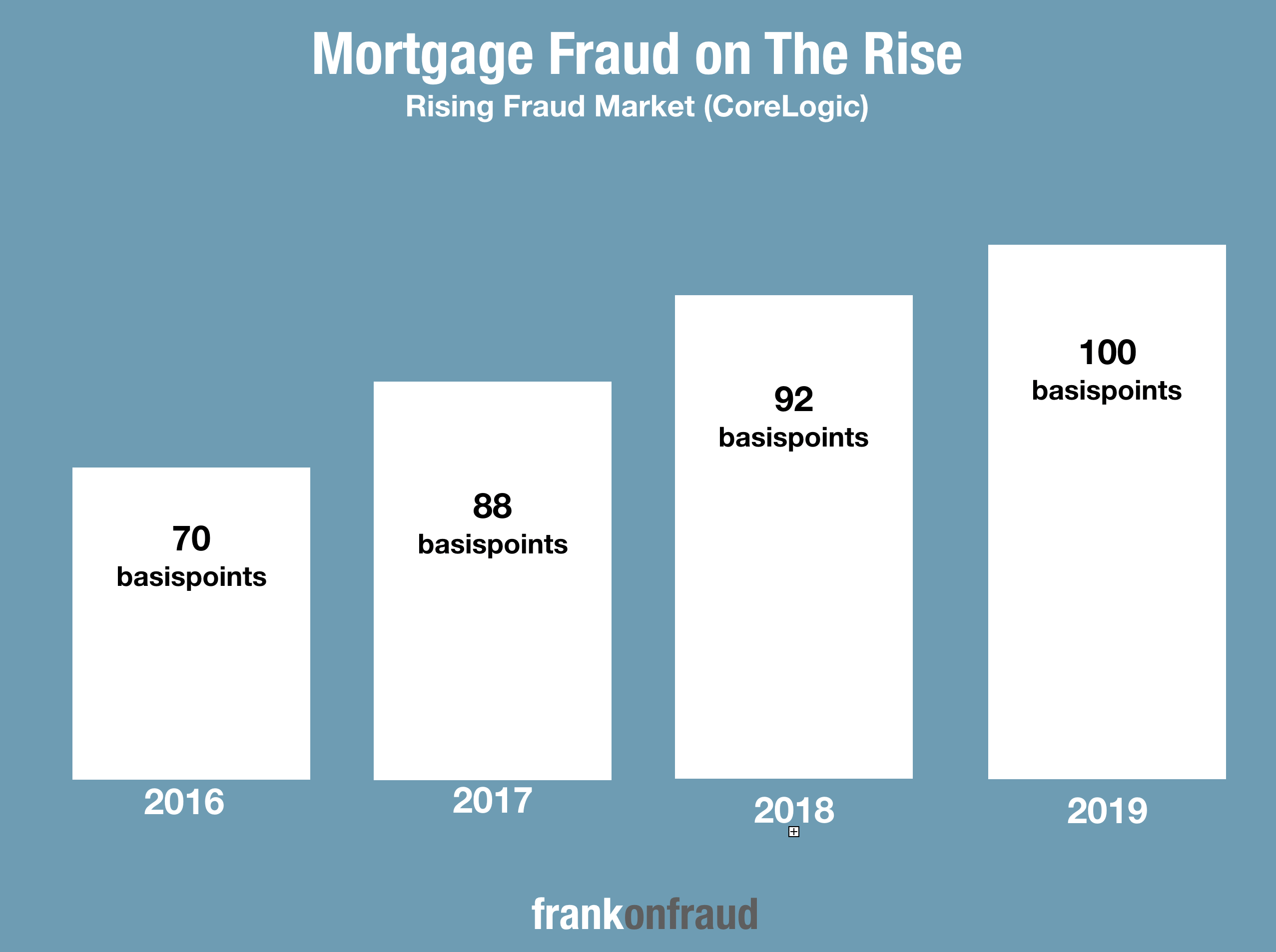 First Party Fraud is driving application and new account fraud to higher levels and this increasing trend will continue into 2019.   As homes and automobiles get more expensive, consumers will be more inclined to misrepresent information on their loans to qualify.  And as interest rates rise in 2019 (making loans even more expensive), we expect that misrepresentation to increase even more.

Look for increases in application fraud in 2019 – in particular, income fraud which will drive up both auto and mortgage application fraud rates.  Analysis by PointPredictive indicates that income-related misrepresentation increased over 24% during 2018 and the trend looks to go higher. 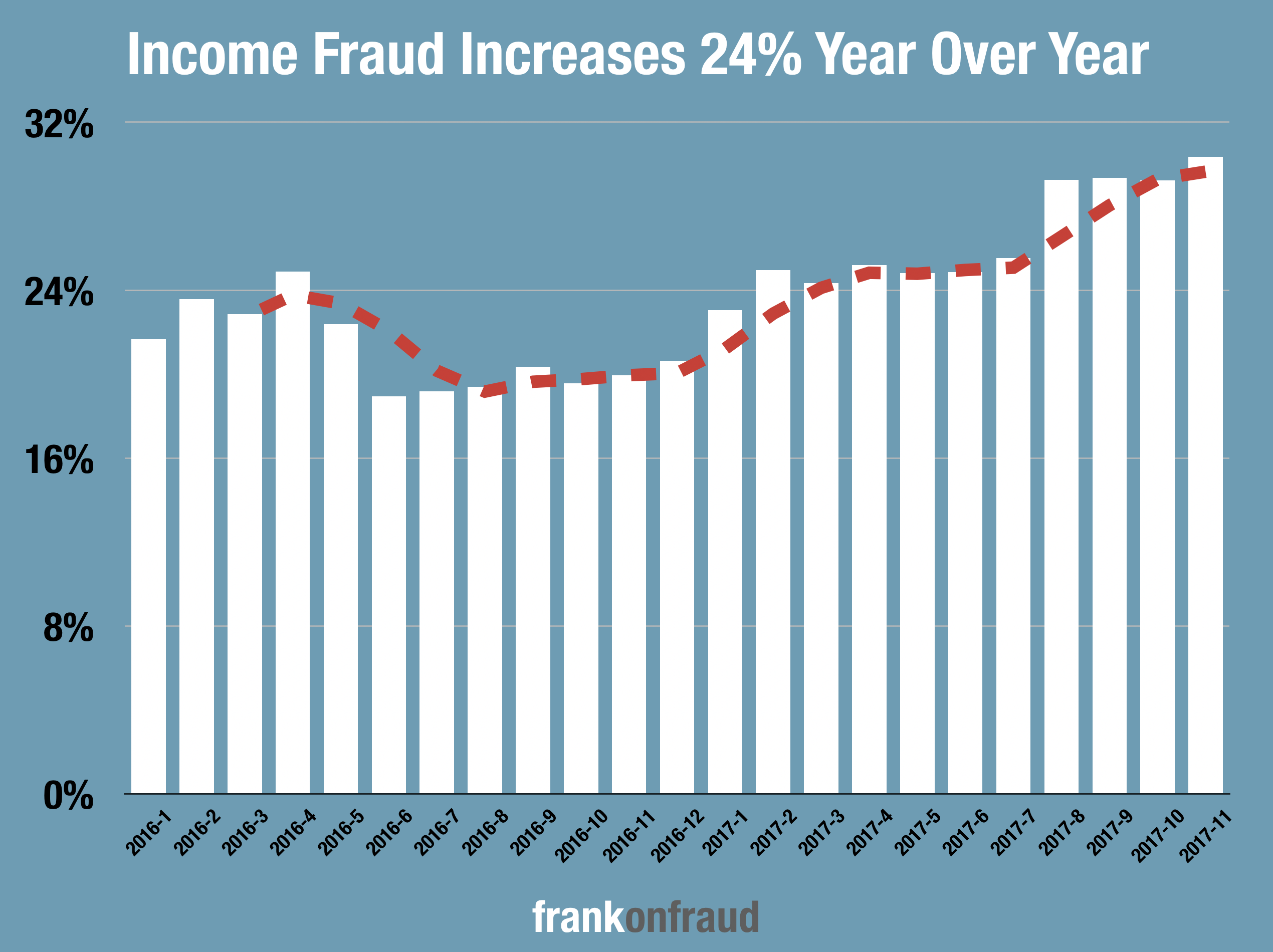 Once the fraudsters found mobile fraud, they stayed in mobile fraud. Fraudsters have abandoned traditional brick and mortar channels and desktop and are now focused, in large part, on mobile. RSA reports that mobile fraud has increased by 600% over the last 3 years accounting for over 65% of fraud transactions.

The rise in mobile fraud is being spurred by apps such as ApplePay, Square, Venmo, Zelle, as well as the increased use of banks’ mobile apps which allow customers to deposit checks right on their phone.

In 2019, mobile fraud will continue its record-breaking growth and could increase to 75% of all fraud transactions. 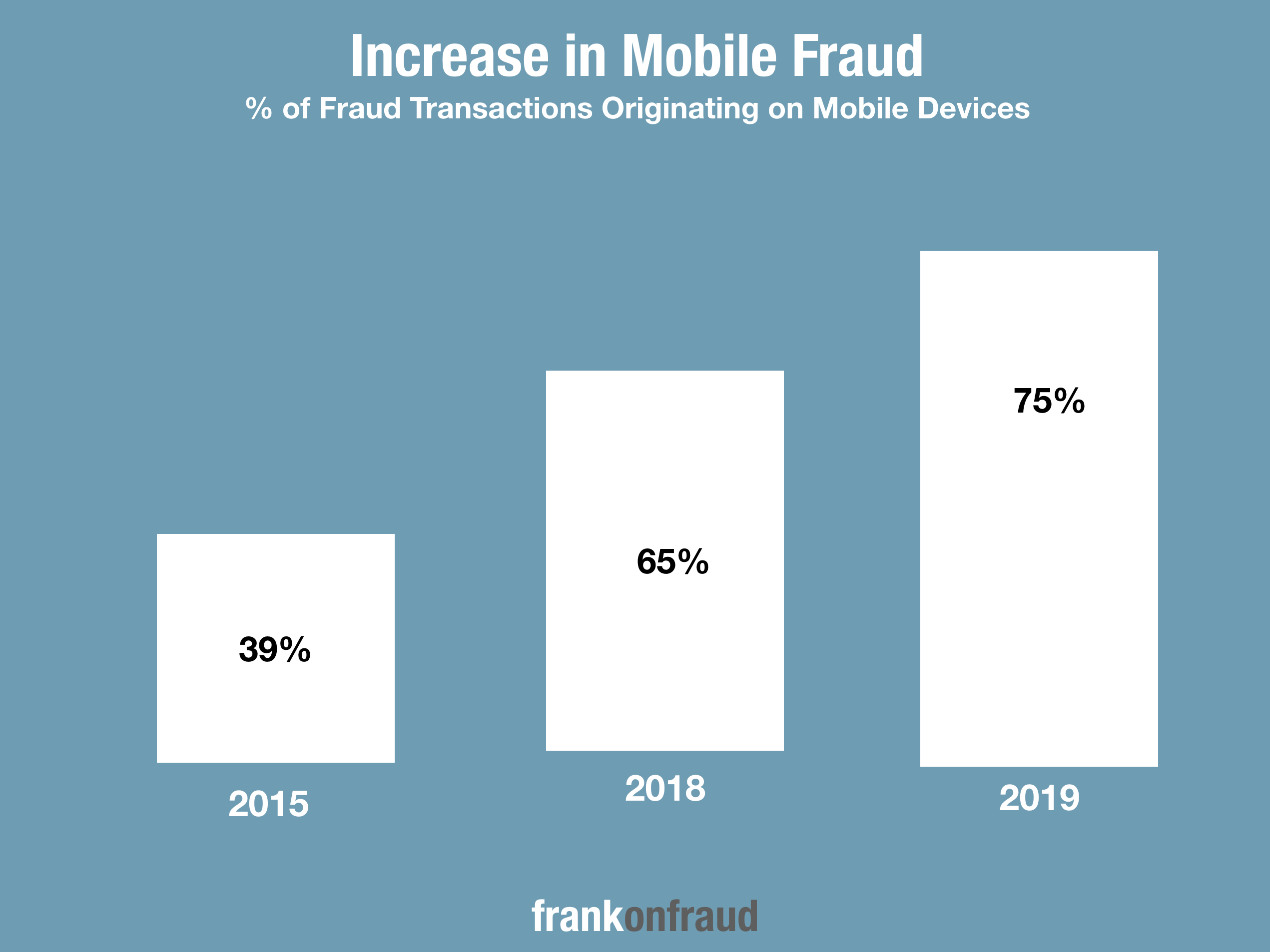 2018 ushered in one of the largest cases of internal fraud in history with the $1.8 Billion Dollar Punjab National Bank case where 3 employees were arrested for facilitating fraudulent loans for Nirav Modi.

And that case is just the tip of the iceberg.  A large percentage of banks and lending companies have woefully inadequate internal fraud monitoring capability.  As a result, most cases go undetected until loans default or the fraud becomes so large that the general public becomes aware – such as the  Wells Fargo Ghost Account Fraud of 2016.

We predict similar large cases of internal fraud will come to light this year as interest rates rise, the economy tightens, and more loans default. 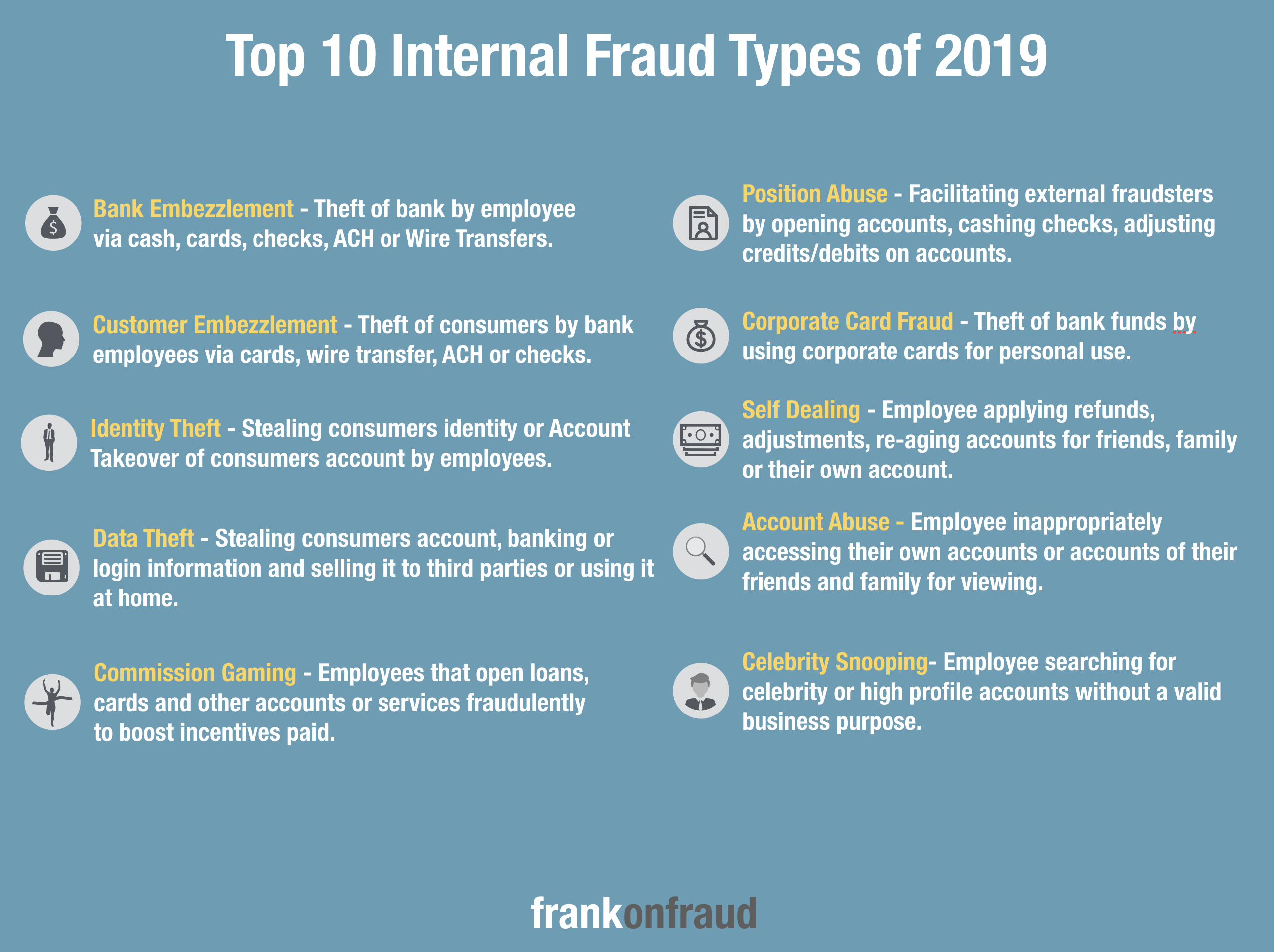 Prediction #8 – Over 4 Billion Data Records Will Be Breached

History is the best indicator of future performance and the number of breached data records is increasing year over year.     While Gemalto has yet to publish statistics for the entire 2018 calendar year, there were already more than 3.3 billion records breached as of June.

Look for more massive data breaches in 2019.  By all indications, it could be over 4 billion records. Consumers are being inundated by scam attempts at a rate never seen before.   IRS Scams, Elderly Abuse Scams, Romance Scams, Impostor Scams, BEC and Bad Check scams all target consumers with the intent to drain their bank accounts.  The problem has gotten so bad that the FBI repeatedly issued warnings to consumers several times during 2018.

While banks do not always reimburse for scams, they are having the effect of pushing the bank’s fraud departments to the brink.  As an example, the rate of check fraud continues to increase even as legitimate check use tumbles to its lowest levels since checks were introduced to the banking system.

Look for scams to continue to impact banks’ fraud departments and losses in 2019. 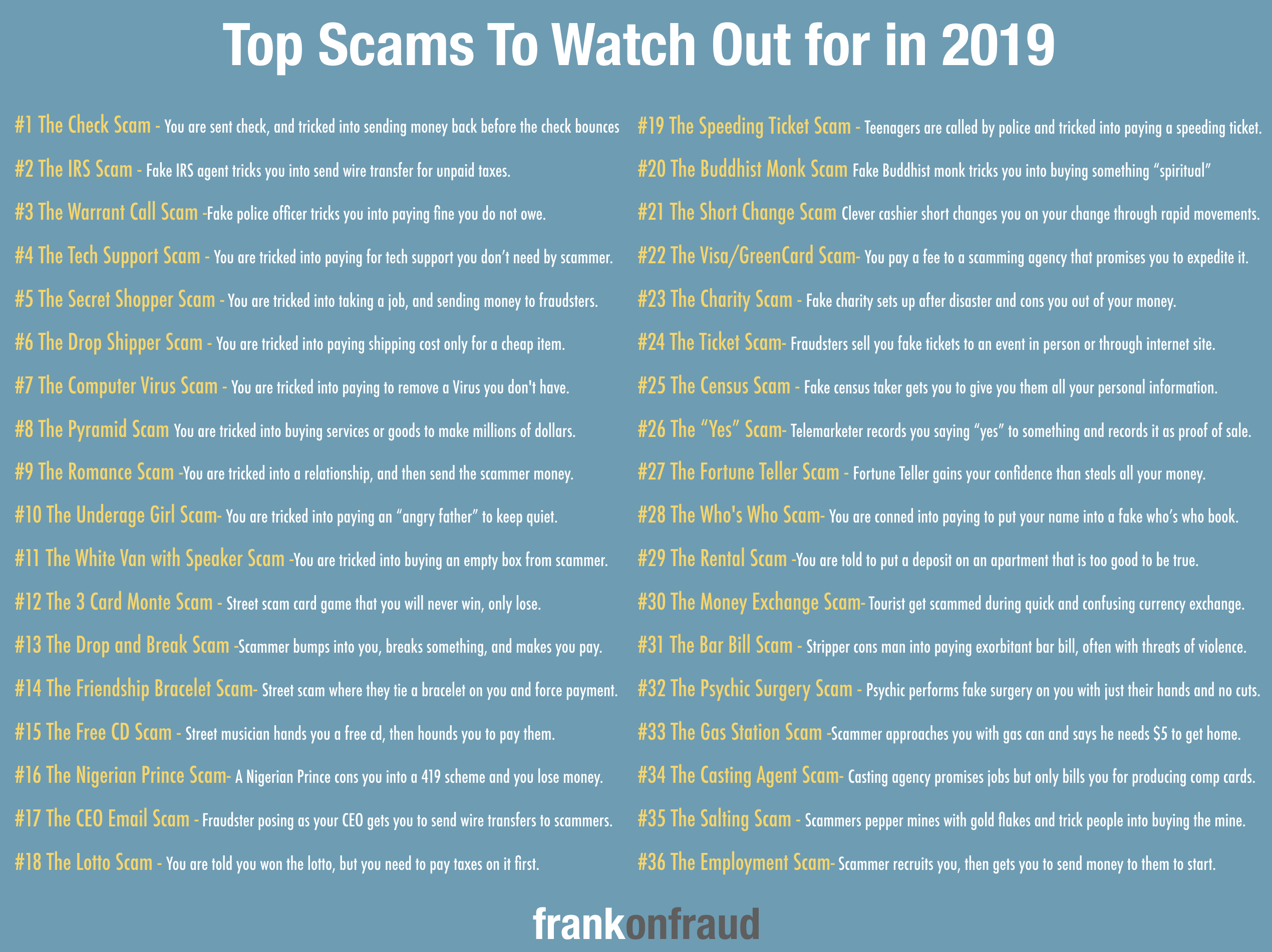 According to Juniper Research, merchants will lose over $130 billion due to online fraud in the next 5 years.  And they plan to spend big to stop that fraud. Juniper goes on to report that digital payment companies will spend $9.6 billion annually on fraud solutions.

To address the issue, throngs of technology and machine learning companies have entered the market to help solve the problem and Silicon Valley investors have poured hundreds of millions into those companies.

In 2019 or soon thereafter, there is likely to be consolidation in the CNP space through acquisition or merger as bigger companies look to acquire capabilities to address the massive CNP market as it grows.   The most likely areas of consolidation would be in Chargeback Guarantee or Fraud Platforms for merchants. 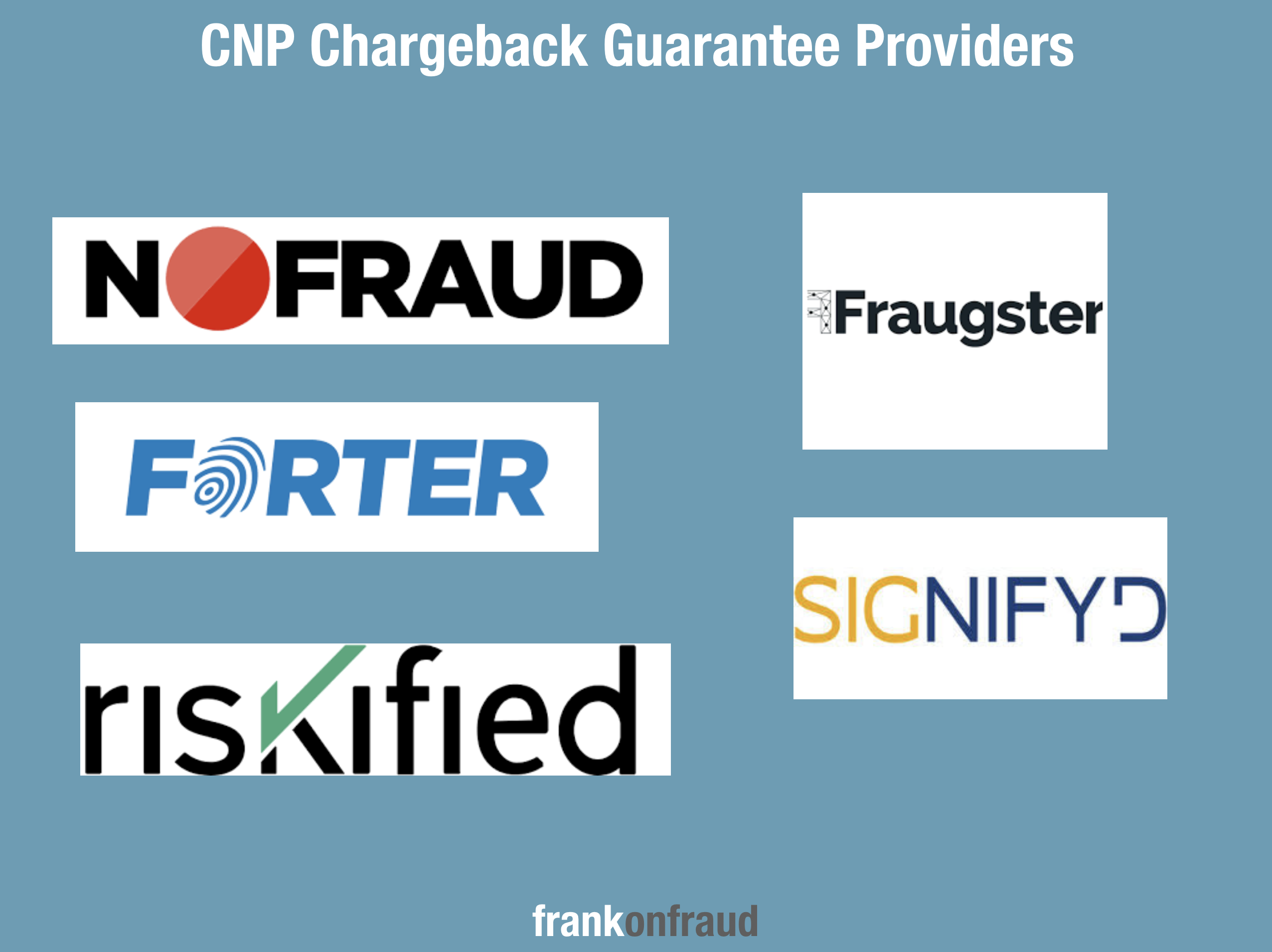 Best of Luck To All You Fraud Fighters in 2019

So there you go.  There are our predictions for 2019.  Did we miss anything?  We’d love to hear from you and what you think.
Special thanks to Maryann Miller for her collaboration on this blog post.