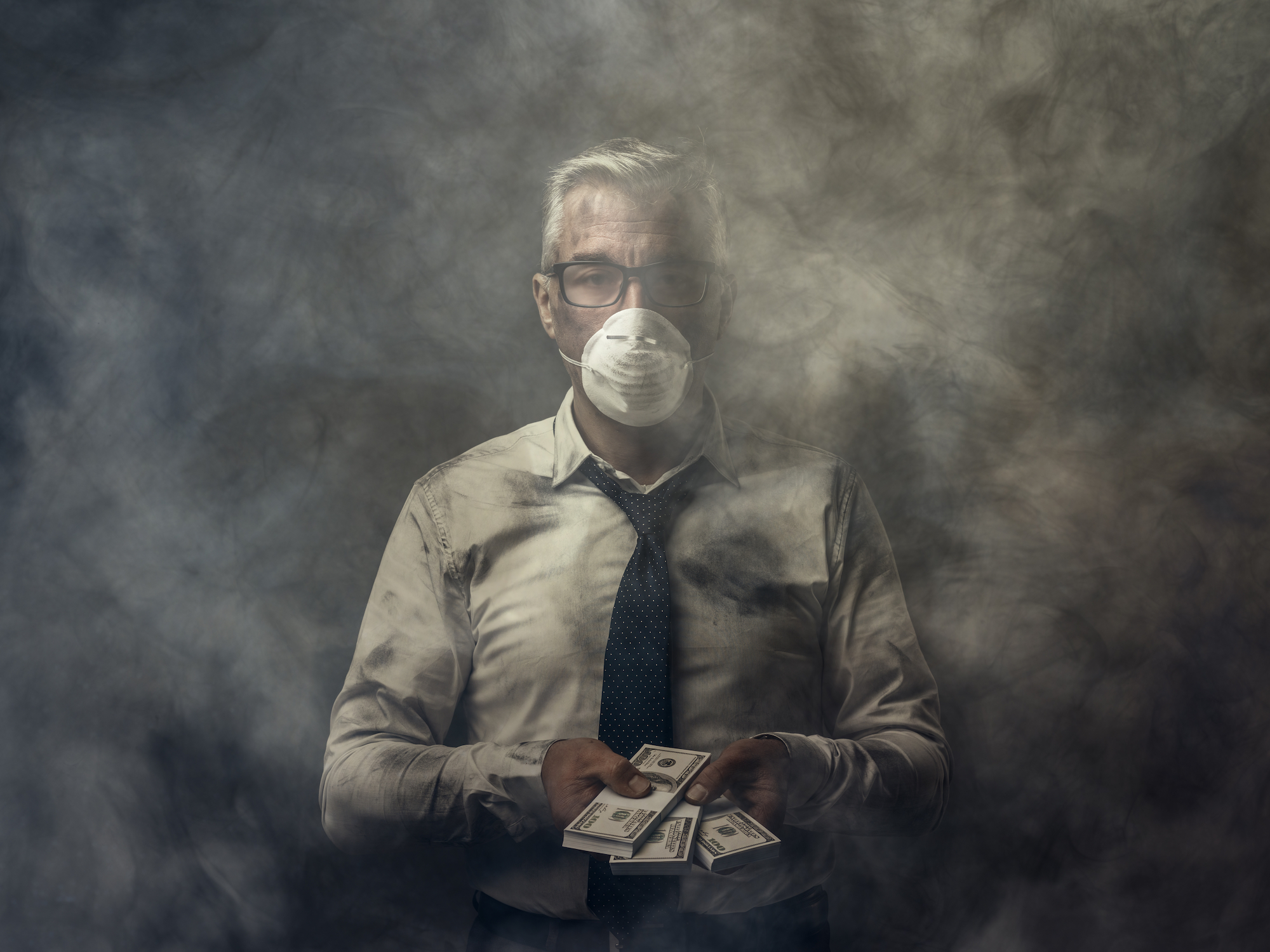 When the government gives away $660 billion dollars in 30 days, you can expect some fraud fallout right?

Well, that’s exactly what’s happened and what many predicted would be the case with the SBA’s PayCheck Protection Program.

I had originally estimated 5% of the loan program would be subject to fraud, which would mean about $33 billion in fraud will be incurred when all is said and done.

The fallout due to fraud has been swift and in the last week has been escalating quickly. Here is what we know so far.

#1 – Large Public Companies and Other Questionable Applicants Swooped In

The first sign of problems with the program became obvious in the first week when big companies started to get caught with their hand in the cookie jar.

Large public companies with hundreds of millions in annual revenues and thousands of employees were applying for PPP loans and receiving them.

And it wasn’t only public companies that stormed the government program – even the Los Angeles Lakers – valued at a $3.8 Billion and one of the top 10 wealthiest sports franchises in the nation was granted a loan for $4.6 million.

On what planet are the Los Angeles Lakers a small business? Face it, their application stepped far over the line of the legitimacy to outright misrepresentation if you ask me. This is the same team that charges their fans up to $2,500 a ticket for a seat at their games.

And Lakers were not the only sports team to get PPP loans. 5 different major league soccer teams were also granted loans. United, Inter Miami, Orlando City, the Philadelphia Union, and the Seattle Sounders were all granted loans but it is unclear if those teams will keep the money or return it.

If you want to see a list of all public companies that received PPP loans, a consumer watchdog group created a site to track the companies and their annual revenues here – PPP Loan Tracker.

#2 – A Wave of Companies Are Returning Funds

An estimated $800 million of PPP loans were granted to public companies in the first round of funding alone. The public backlash was so severe that a wave of companies started to return funds back to the government.

When Treasury Secretary got wind of the LA Lakers taking PPP funds he was outraged and went on CNBC to express his outrage.

“I’m a big fan of the team, but I’m not a fan of the fact that they took a $4.6 million loan,” he said on CNBC. “I think that’s outrageous and I’m glad they returned it or they would have had liability.”

And the Lakers were not alone. Shack Shack which got a $10 million loan, and Kura Sushi, which got $6 million, Ruth’s Chris Steakhouse, which got $20 million, Potbelly Sandwich Shop which got $10 million, all announced within a week that they would return their funds as well.

The government did a pretty dismal job establishing guidelines for the loan program and they realized that part of the issue was there were too many loopholes for greedy public companies to abuse.

So they established a safe harbor for companies to return the money and not risk any liability.

Under the Safe Harbor program, companies were given a grace period until May 14, 2020 (extended from May 7 ), to repay loans they may have obtained “based on a misunderstanding or misapplication of the required certification standard.

To add fuel to the fire, Mnuchin indicated that any company that received a PPP loan over $2 million would be audited and would be subjected to criminal liability at the highest levels of the organization.

The government essentially put the onus back on the companies to determine if in fact all of their certifications were true and accurate. With the increased government scrutiny, many companies elected to repay the loans and look elsewhere for financing.

As of last week, over 300 public companies had repaid close to $1 billion dollars as part of the Safe Harbor program.

#4 – Small Businesses Are Fabricating Their Payrolls to Boost the Loan

Borrower application fraud and misrepresentation levels are high. The most common form of misrepresentation appears to come from inflating or manipulating the payroll for the loan. Since the loan is calculated by 2.5 times the average monthly salary of the company there is a very high motivation to inflate payroll to get more money.

In this case, the CEO hired his 4 teenage kids and wife to boost payroll to get more money.

And in the case, the employer wanted to overpay the worker and insisted that they cut him a check back for the difference.

This employer is pushing through employee’s vacation days to boost their payroll to raise loan amounts.

This employer is paying employees for FUTURE work with PPP funds. He is paying them now when they are not even working and are collecting unemployment.

The SBA Guidelines are so vague and confusing that employers like this are considering wages to $99,000 to be in compliance. So many unintended consequences.

This employer eliminated 2 positions but then required the employees to stay until July 1st so that they would not lose their PPP loan forgiveness. More unintended consquences.

And FoxNews ran a special segment on how common borrower fraud is the loan program.

#5 – Outright Fraud is Being Reported

The FBI made a big arrest last week. The first of what is probably many.

David A. Staveley, aka Kurt D. Sanborn, 52, of Andover, Massachusetts, and David Butziger, 51, of Warwick, Rhode Island, were charged with conspiring to obtain PPP loans claiming to have dozens of employees earning wages at four different business entities when, in fact, there were no employees working for any of the businesses.

According to court documents unsealed in U.S. District Court in Providence, Rhode Island, the fraudulent loan requests were to pay employees of businesses that were not operating prior to the start of the COVID-19 pandemic and had no salaried employees, or, as in one instance, to pay employees at a business the loan applicant did not own.

Allegedly, Staveley and Butziger discussed via email the creation of fraudulent loan applications and supporting documentation to seek loans guaranteed by the SBA for COVID-19 relief through the Paycheck Protection Program (PPP). It is alleged that Staveley posed as his brother in real estate transactions.

It is alleged that Staveley claimed in loan applications requesting more than $438,500 that he had dozens of employees at three restaurants he owned, two in Warwick, Rhode Island, and one in Berlin, Massachusetts. An investigation determined that one of the Rhode Island restaurants, the former Remington House, and the Massachusetts restaurant, On The Trax, were not open for business prior to the start of the COVID-19 pandemic, at the time the loan applications were submitted, or at any time thereafter. Moreover, Staveley did not own or have any role in the second Rhode Island restaurant, Top of the Bay, for which he was seeking financial relief.

According to court documents, Staveley’s Massachusetts restaurant was closed by March 10, 2020, when the town of Berlin revoked the business’ liquor license for numerous reasons, including that “Sanborn” allegedly misrepresented that his brother owned the restaurant. Investigators obtained information that Staveley/Sanborn allegedly used his brother’s personal identifying information in other real estate transactions as well.

Some of these domains could have been registered primarily for the purpose of launching phishing attacks against small businesses to get their money from them. Tessian found that the domain names were potentially misleading and appear to be very similar to naming that hackers and scammers typically use.

The Hackers create these domains for the express purpose of soliciting desperate small businesses than want to expedite the processing of their application or to promise funding of their loan for an advance fee.

# 7 – Prosecuting Fraud on PPP Loans Will Be Problematic

For all the fraud and misrepresentation that might be occurring currently, prosecuting those cases might prove to be difficult going forward.

The PPP Program guidelines and certifications have been everchanging and “fuzzy” from the first day so one could argue that no one is acting with criminal intent or intent to defraud.

In an interesting article published here in Law.com, those fuzzy guidelines could cause big issues for prosecutors.

There are a number of obstacles confronting the government in cases challenging the accuracy of the defendant’s economic necessity certification. The first rests with the vagueness of the certification itself. Applicants are required to certify that “the uncertainty of current economic conditions makes necessary the loan request to support the ongoing operations” of the borrower. Neither the CARES Act nor the accompanying guidance issued by the SBA defines what “necessary” means in this circumstance. The SBA and Treasury attempted to fill this void through the issuance of updated “Frequently Asked Questions (FAQs)” issued on April 23, well after many borrowers received, and in some cases spent, the funds. These FAQs state that a borrower’s good faith certification as to “economic necessity” must take into account the borrower’s “ability to access other sources of liquidity sufficient to support their ongoing operations in a manner that is not significantly detrimental to the business.”