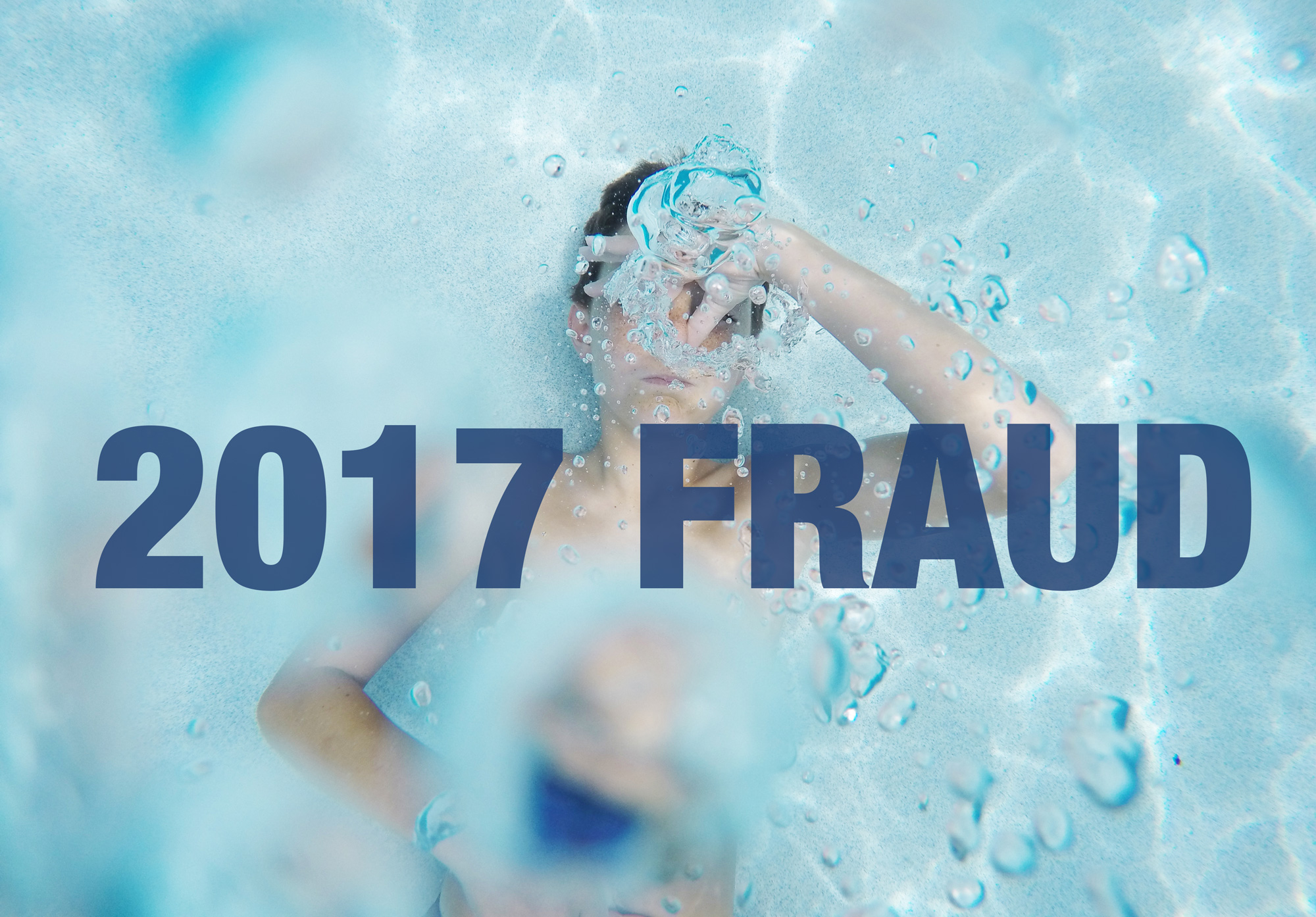 It was a bad year for fraud. A very bad year.  Maybe the worst as I had written about in this article – Why Fraud is Worse Now Than Ever in History.

I spent the last several weeks researching the Top 10 Banking Fraud losses here in the US based on 2016.  I wanted to understand where the most money is being lost due to payments and lending and where fraud was headed for 2017. 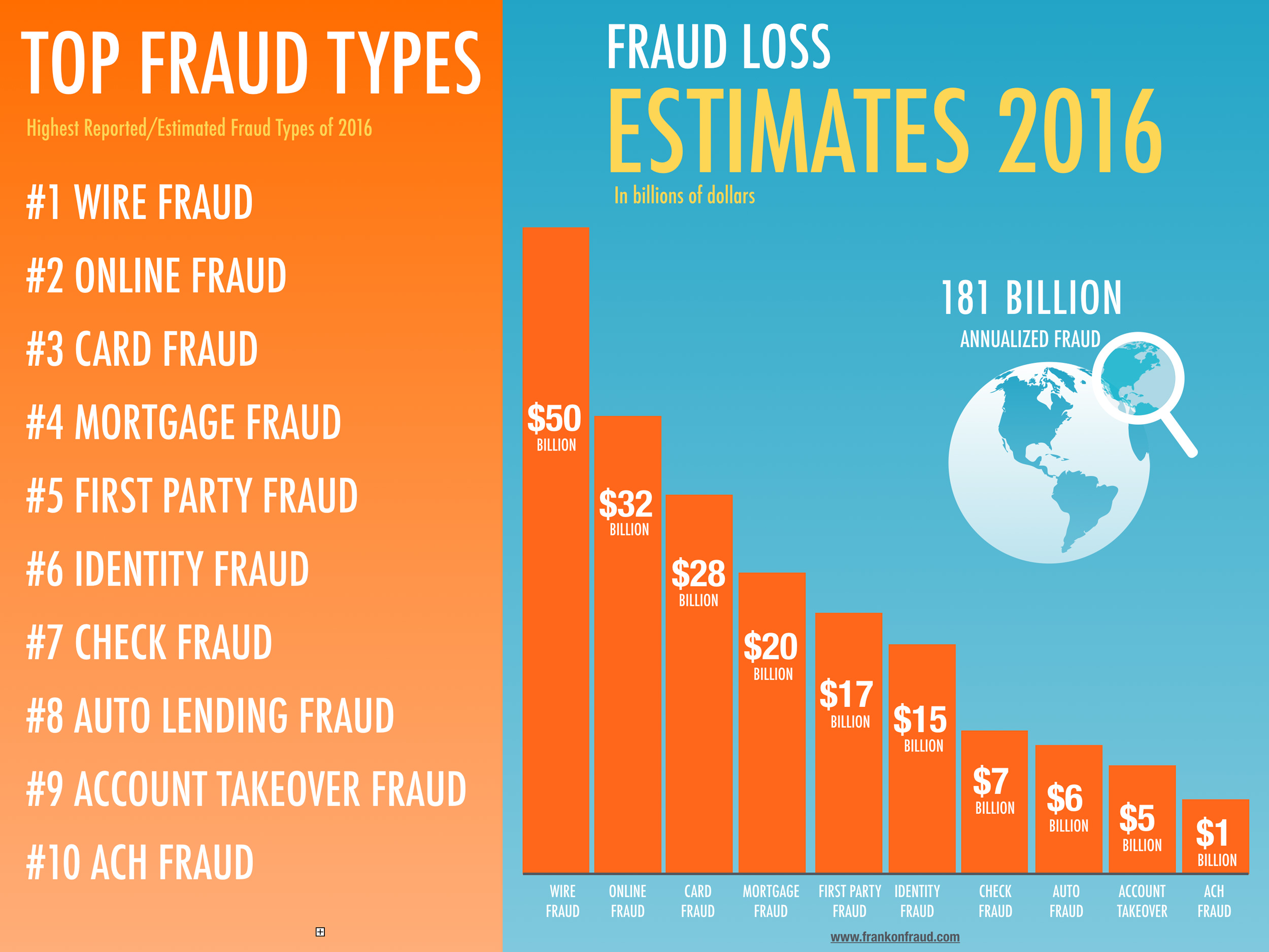 Wire Fraud is booming due to extremely successful phishing and CEO impersonation attacks as well as ongoing romance, eBay and other fraud schemes that bilk consumers on a daily basis.

Add to this, the fact that wire fraud losses are instantaneous and usually untraceable back to a perpetrator, and this type of fraud is one of the most damaging.  Wire fraud losses are big, averaging about $63,000 per occurrence and can run as high as $1 million dollars.  In 2016, close to $1 billion in wire fraud was perpetrated on a single night when hackers infiltrated the SWIFT network and requested money transfers to foreign bank accounts.

Oh, also one more important thing – wire fraud is often not reported because banks don’t take the loss – customers do.  So $50 billion in losses might just be the tip of the iceberg.

You can expect Wire Fraud to increase again this year.  It’s just too lucrative and successful for fraudsters to go away anytime soon.

Online Fraud rates at retail merchants doubled in 2016, thanks to those little chip cards on your credit card.  All those breached cards sitting on the dark web were useless unless the fraudsters could figure out an alternative way to cash in on them.  Guess what?  They did.

You can expect retail fraud to continue its upward trajectory in 2017 as retailers struggle to update their strategies to cope with it.

Card fraud globally is increasing.  And it’s not just because card issuance is increasing and cards are more popular than ever.  It’s because fraud is actually outpacing growth.  The fraudsters are just getting better at using these cards in ways that card issuers and merchants can’t detect right away.

You can expect card fraud to continue its upward move.  Well, even Nilson projects that card fraud will be $31 Billion.

Mortgage fraud occurs when borrowers, brokers or appraisers lie about something in the application.  The mortgage industry is so spooked by fraud, they don’t even call it that.  They call it “misrepresentation” which is a very nice and kind way to refer to fraud.

In any case, fraud and misrepresentation risk are high in mortgage and it ranks #4 of all fraud types.

Expect mortgage fraud to stay flat this year.  While volumes will be down, purchase volumes will comprise a higher percentage of all deals and they are higher risk.

When customers open accounts or loans with no intention of repaying them or committing devious transactions to steal from the bank they are committing First Party Fraud.

Since customers never like to admit to being First Party Fraudsters, these annual losses have been estimated by firms like TSYS and FICO who have experience tracking abnormal behaviors of people that either don’t pay their loans or go way, way over limit on their accounts.

Expect First Party Fraud to increase in 2017,  particularly since lending programs are getting progressively riskier.  Did I mention First Party Fraudster’s love it when banks are generous with their new loan programs?

Did I mention First Party Fraudster’s love it when banks are generous with their new loan programs?

Identity fraud has, and probably always will rank in the top 10 fraud types.  Fraudsters have bad credit typically.  So they need to use someone else’s to con banks out of money.  Identity fraud spiked up in 2016, primarily due to IRS Tax Refund Fraud and the re-emergence of New Account fraud at card issuers and banks.    Identity fraud was another product of fraudsters shifting their behavior after chip cards were implemented in the US.

Identity fraud spiked up in 2016, primarily due to IRS Tax Refund Fraud and the re-emergence of New Account fraud at card issuers and banks.    Identity fraud was another product of fraudsters shifting their behavior after chip cards were implemented in the US.

I expect Identity Fraud to continue increasing this year as EMV continues it’s rollout here in the US.

Good old-fashioned paper checks.  Your grandma still uses them.  And inevitably, the people that are right in front of you at the check out stands at the grocery stores.

Fraudsters still love them and write billion of dollars in fraudulent checks a year.  The more banks think this fraud is going away, the more the fraudsters prove them wrong.  The ABA estimates about $7 billion a year in checks but they also admit banks stop about $6 billion of those from ever getting paid.

You can expect Check Fraud to increase in 2017 because mobile phones are increasing the risk of fraudulently deposited checks. In fact, there was close to $1 billion of duplicate deposit fraud checks last year.

This is one near and dear to my heart.  Auto Lending fraud happens when borrowers or dealers lie about the income, employment, collateral value or identity during the application process.

And given the fact that there was over $1 trillion in auto loans last year submitted by over 100,000 dealers here the fraud risk run high.    Auto fraud can run as high as 50 to 200 basis points based on the lender’s portfolio.

Expect auto lending fraud to increase next year due to increasing interest rates, rising car prices and more competition in the market.

Account Takeover is being driven by huge credentialing breaches at Yahoo, and Linkedin.  Since 50% of consumers use the same credentials across all of their online sites, fraudsters have been able to use brute force attacks to takeover their online banking accounts.

You can expect a huge increase in Account Takeover in 2017.  I feel like this is the year that it is going to explode and reach epidemic levels.

ACH fraud is highly underestimated.  Banks typically do not report on ACH fraud independently and often categorize it under account takeover or online banking fraud.

In any case, while ACH fraud is low (about $1 billion estimated), I believe it is the sleeping giant.  Since ACH is moving to same day settlement many fraudsters will be shifting from Wire fraud request to ACH request which can be more cleverly hidden in payroll batches and are often not subject nearly the same level of scrutiny that banks do on their wire transfers.

As you can clearly see, 2016 was a bad year for banking fraud and 2017 is projected to get worse.

I think we’re entering a new phase of risk management that really requires a very adaptive approach which will allow you to respond much more quickly and effectively to changing trends.