How Someone Stole My Photographic Identity

I work in fraud management.  I help banks and companies prevent fraud such as identity theft where someone steals their customers information, poses as them and then proceeds to sack their credit cards and bank accounts for everything in them.

But a few years ago, I rann into an altogether new problem – Photography Identity Theft and the victim appears to be me.  The person using my photos didn’t just take one or two photos, but literally thousands of my pictures and tons of my blog post and posted them all on his own site.

My photography site in case you are interested is here – FrankieFoto

I will protect his identity. But here is a blurred picture of him.

Here is his blurred picture.  I found it on his Facebook Page which was choked full of many of my photos that he was claiming to be his own.  Most of the stuff on his Facebook page was recently deleted, perhaps there are other photographers going after him too. 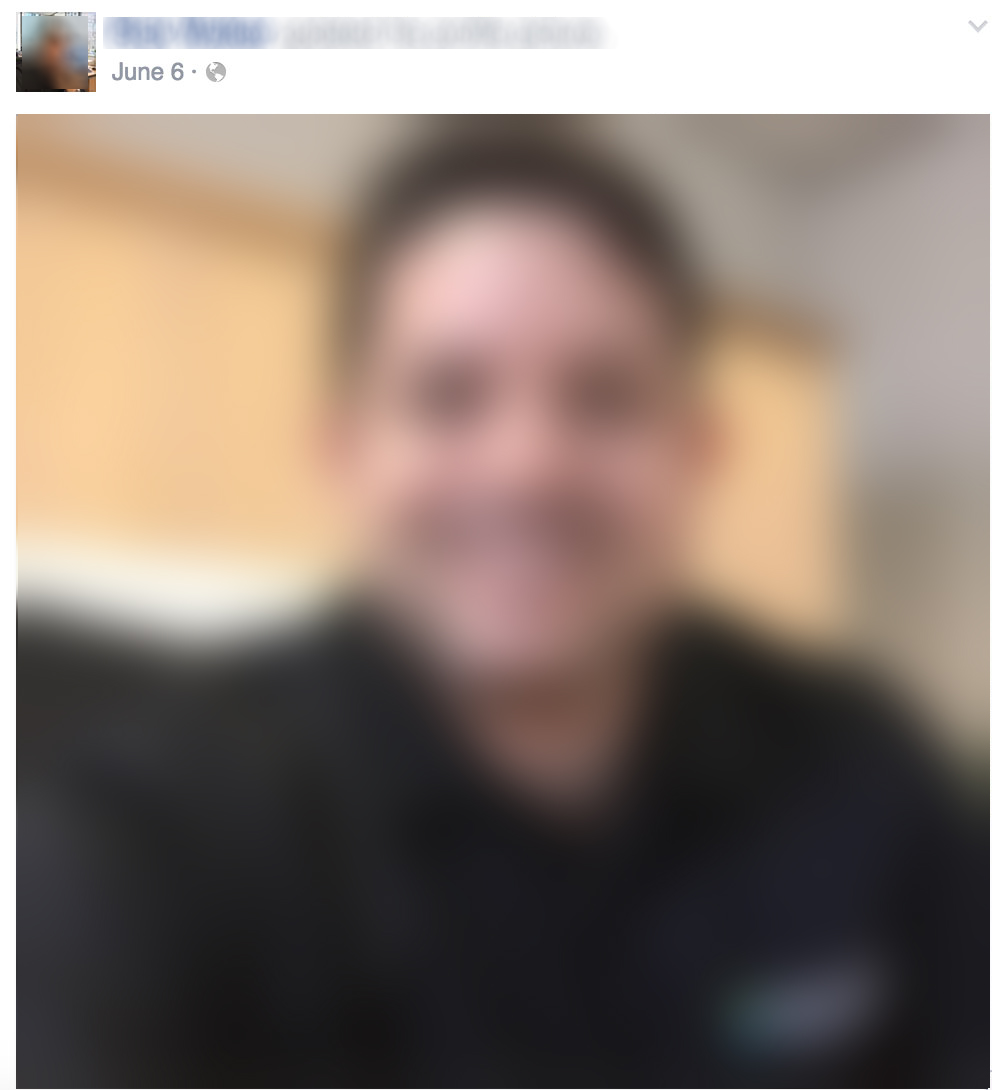 To make a long story short,  I wrote him a nice message on the site advising that he could pay $50 a piece for the pictures, or remove them from the site.  He removed the pictures, that were on one site, but then promptly posted them over to another site completely different website thinking I would not notice And not only that but he continued to steal pictures and put them on his Facebook page.

I took screenshots of everything to inventory all the pictures and blogs he plagiarized.  You can’t trust someone that sneaky ever to tell the truth or be honest, so I needed to keep a log of everything he was taking from me which was extensive – as I said literally hundreds if not thousands of pictures.

I have over 1000 photography blog post in the last 4 years.  This guy combed through them daily and updated his own blog with my original pictures but also my writing word for word.  Well, he did change a few things.  He was careful to remove pictures of myself or my wife and to remove any mention of my name from the post.  He also changed dates (often to dates prior when I posted the blogs to make it appear that he posted them before me).

The shot below was a blog I wrote for PetaPixel that he plagerized word for word and put on his own blog. 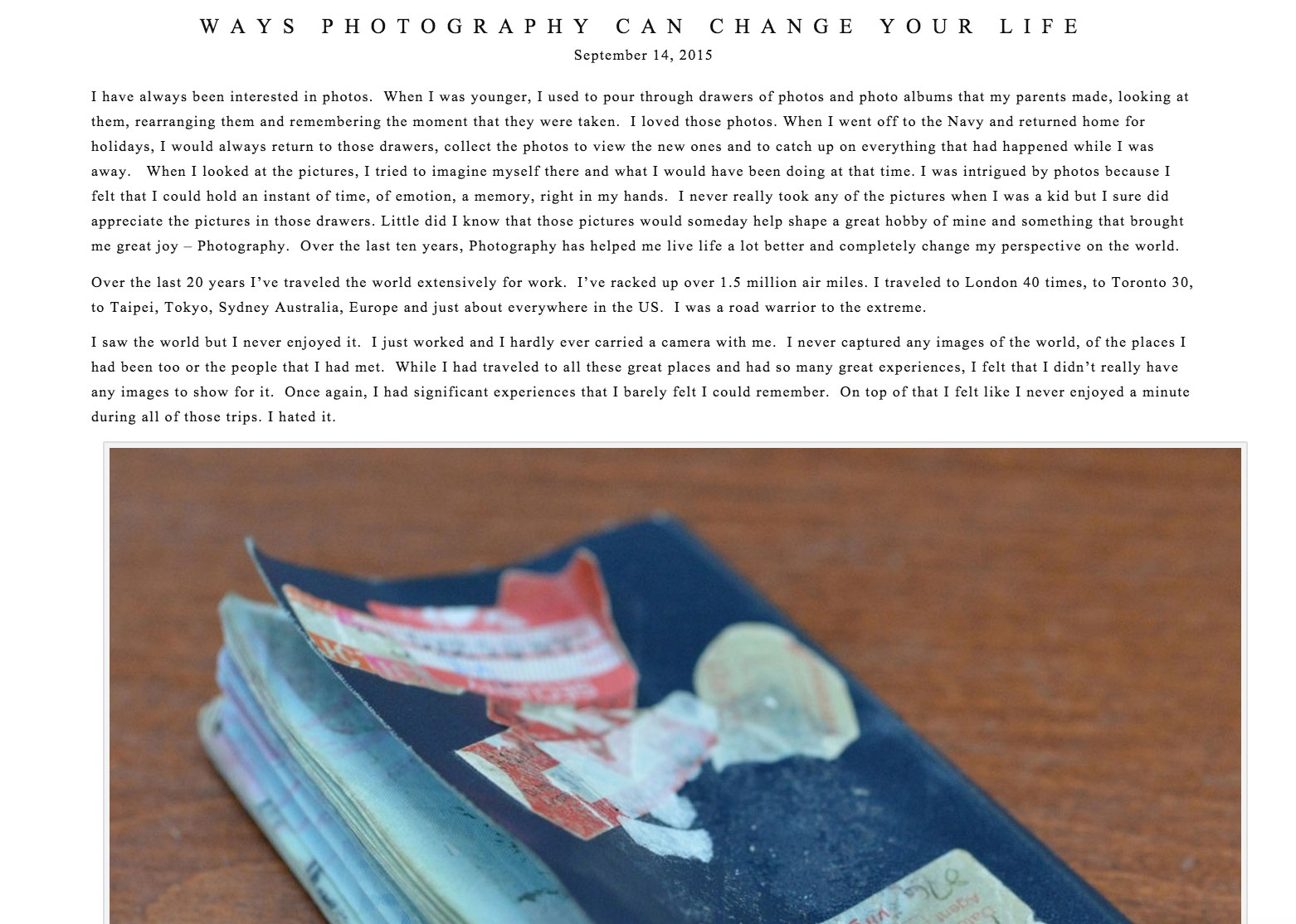 The guy likes San Diego.  That is for certain.  I can tell in the pictures that he choose and the blog post.  But I was shocked to see entire galleries that I had created and uploaded for years posted to this guys site.  There appeared to be thousands of my pictures across various galleries he decided to appropriate for his own site. 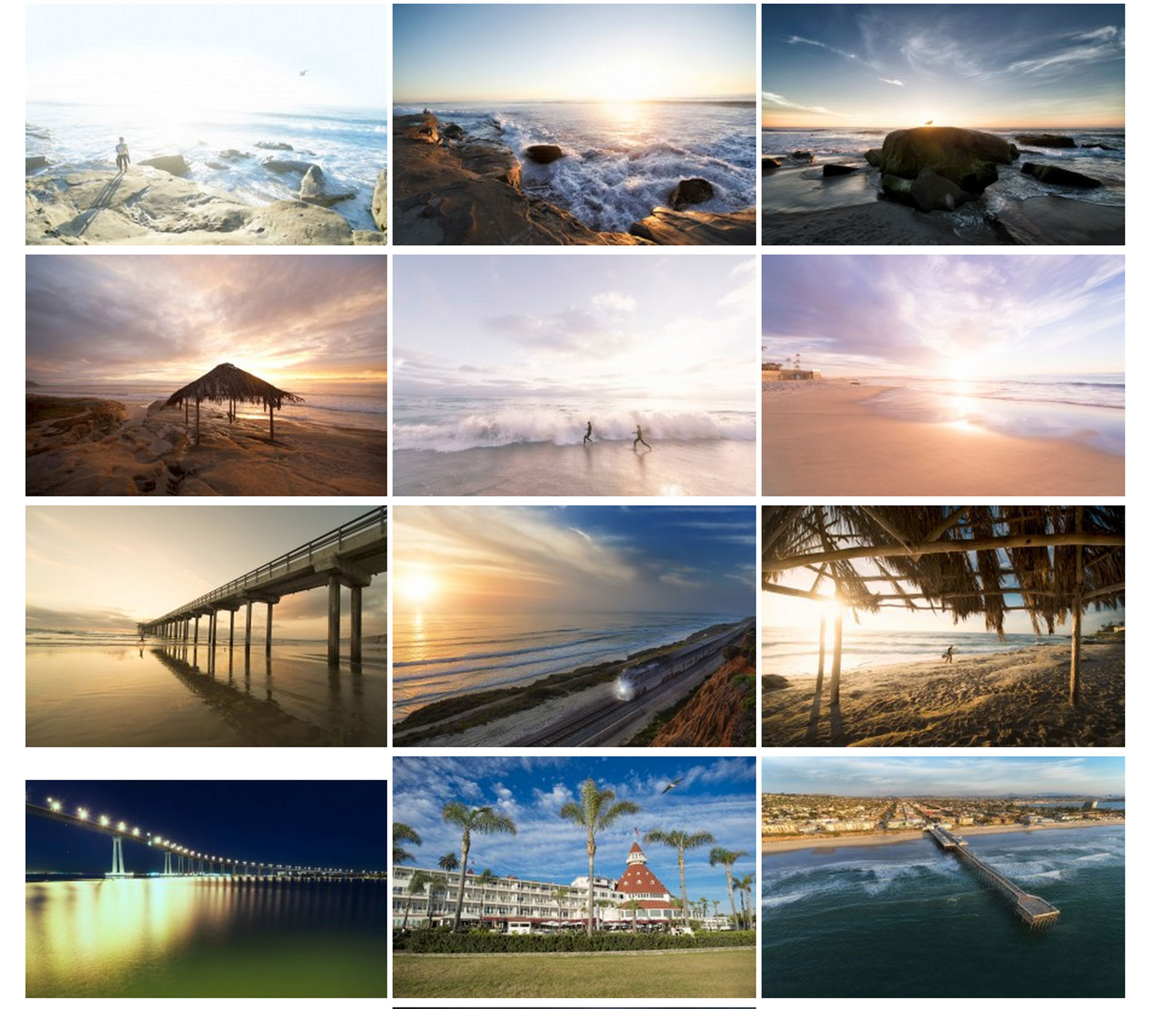 3)  He Posted Tons of My Pictures on his Facebook Page 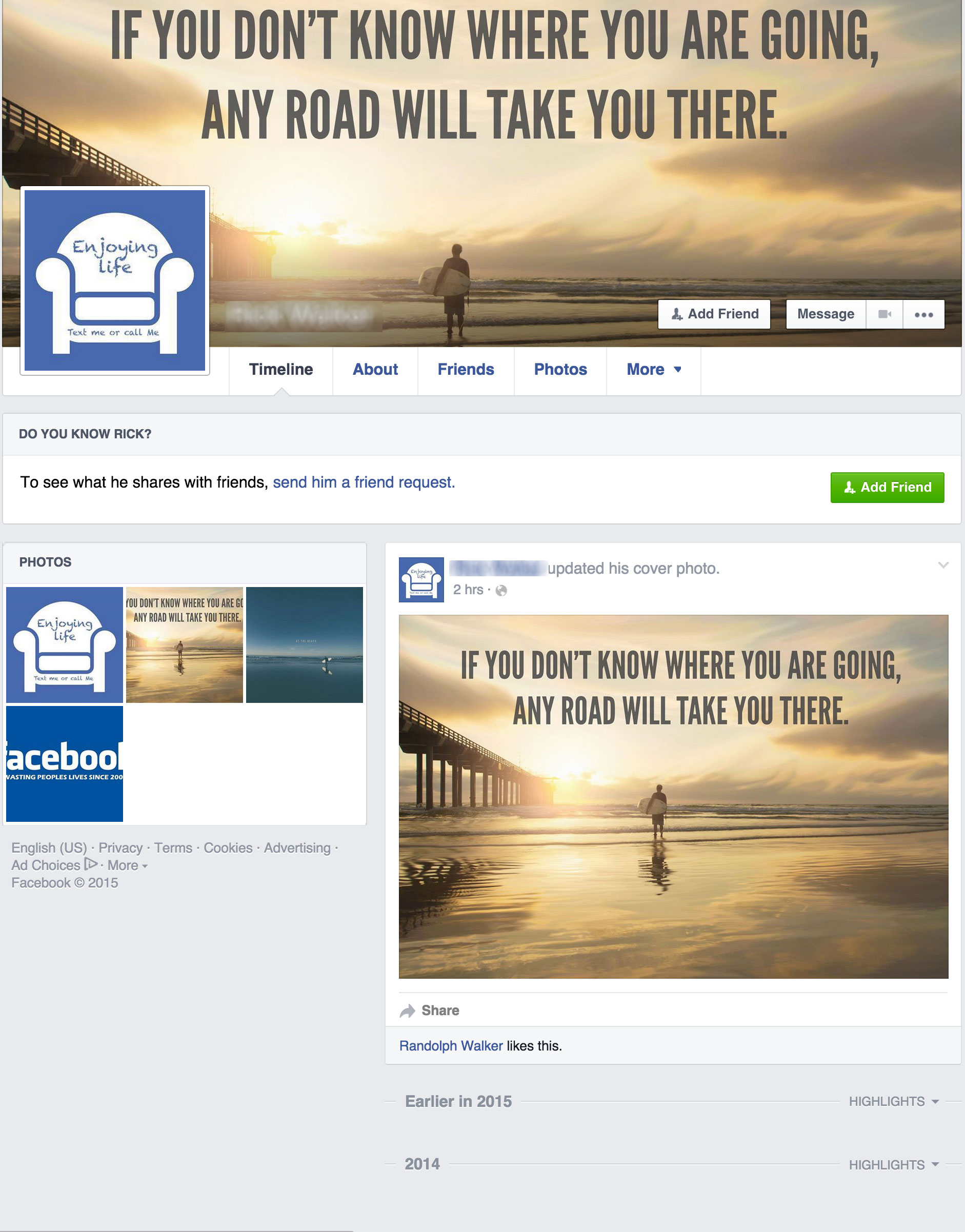 4)  It wasn’t only my pictures he was stealing. But other photographers as well.

Through simple image searches on google, I was able to find many other pictures on his Facebook and personal site that appear to have been lifted from other photographers too.  This is an awesome picture taking by Joshua Kelsey of Outline Images. You can find the original on this site – Outline Images but that didn’t stop him from posting the image with the outline images watermark somehow mysteriously missing from the photo. 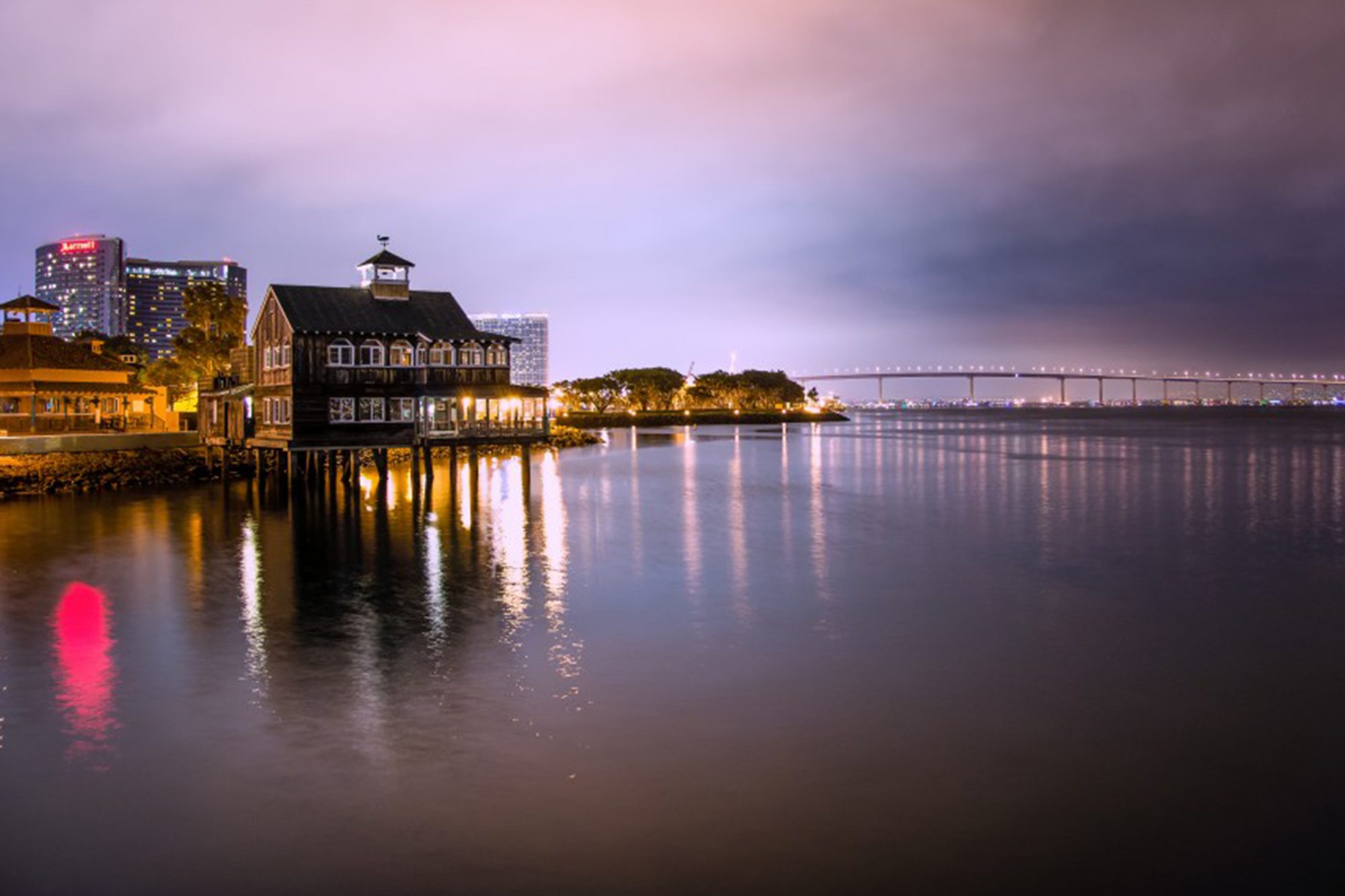 5)  He Tried to Hide his Tracks after I sent him this Letter.

I tried to send him a friendly note to get him to stop.  Rather than reply to me to explain himself.  He just took the pictures down and put them on another site.  Now that is sneaky.  The only way I can think to get this guy to stop is to call him out on it  publicly so he doesn’t think he can keep his charade going. 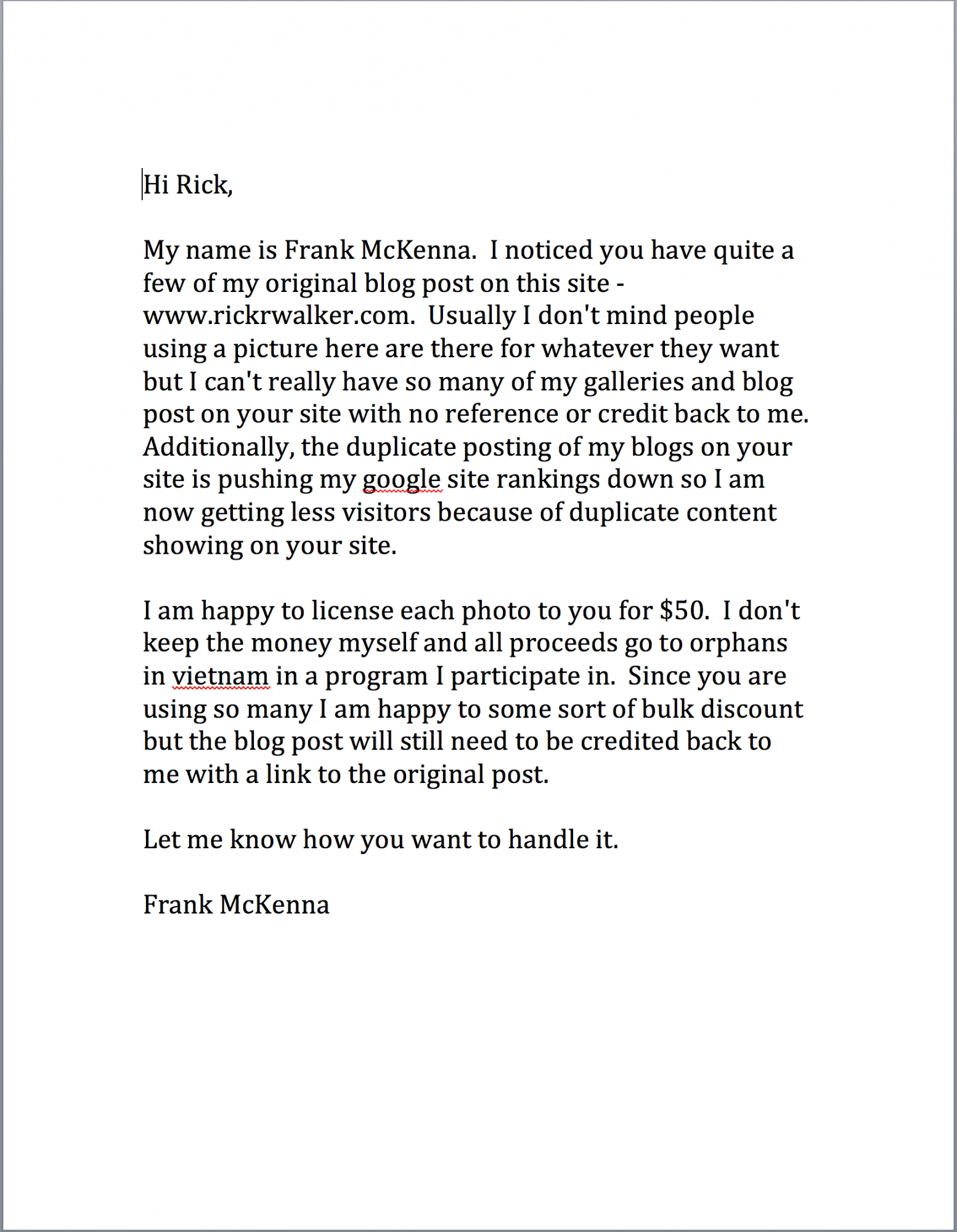 What is this Guys Motivation?

When I first discovered this a few weeks ago I was initially shocked and a bit upset.  But I spent a week thinking about it and figured there had to be a reason for someone to steal pictures so blatantly.  He wasn’t trying to make money or sell the pictures.  It didn’t look like he had a photography business and was trying to pad his portfolio.

Those are the two main reasons people usually do this.  After a lot of thought I finally figured out that he just wanted people to think he took pictures all over San Diego and traveled a lot.

I found a few kickstarter projects he was working on to generate money for his walking trip from the South Pole to the North Pole and I think maybe he wanted to show that he was a guy that traveled to a bunch of different places.

Since I had pictures of a bunch of different places that I traveled to it became a good source for him.

What Have I Learned?

I have a pretty liberal policy with photography. I rarely charge anyone for a picture and if I do all the money goes to my cause – Orphans in Vietnam.  Because of that I don’t really protect my pictures enough by putting big watermarks to prevent re-use of them without my permission or knowledge.

But 99.9% of people in the world are trustworthy and I always want them to be able to view my pictures without any watermarks.  It’s just those few bad apples in the bunch that take advantage and can’t be trusted.

Why do I consider this Photographic Identity Theft?

Stealing a picture here or there is annoying and I would rarely get upset.  When someone takes entire galleries of your work. When they take your blogs word for word and then make them their own.  When they repeatedly present your work as their own on their Facebook page. When they remove watermarks from pictures and all signs that the picture belongs to someone else.

And this creates all the confusion that real life identity theft creates.  For example, if Google sees my content posted on his site with a date 1 year earlier, they will assume that is the original article and return that in search results.

If someone wants sees a picture and they want to buy it, they might contact him.  This takes money directly from the kids that get money when I sell my photos – orphans in Vietnam.

And finally, I have to deal with all of the hassle of getting this guy to remove my stuff.  And he doesn’t seem easily convinced.  This could take a long time for me to unravel this guy from my stuff.

Photographic Identity Theft is a part of the new digital world.  It’s a price we need to pay for having our work easily shared to all.

But at the same time we need to protect ourselves and our work from lazy or greedy people that don’t want to do the hard work of going out there and taking pictures.