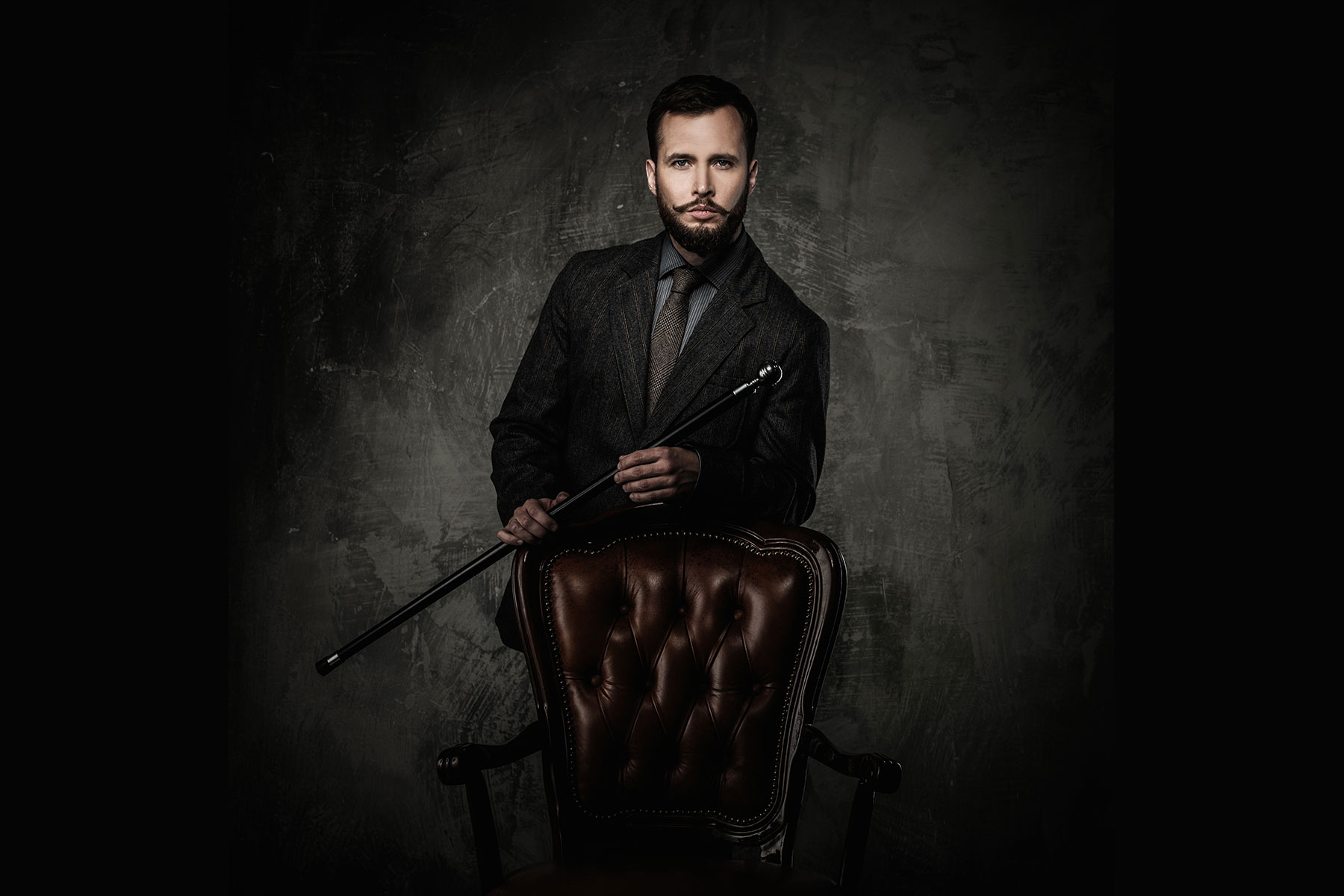 The year was 1960.  American Express had just launched their first plastic charge card one year earlier and Diners Club was gaining widespread popularity with cardboard credit cards that they launched in 1950.   Not many people knew what credit cards were at the time.  There were probably less than 1 million total credit cards in circulation at the time. 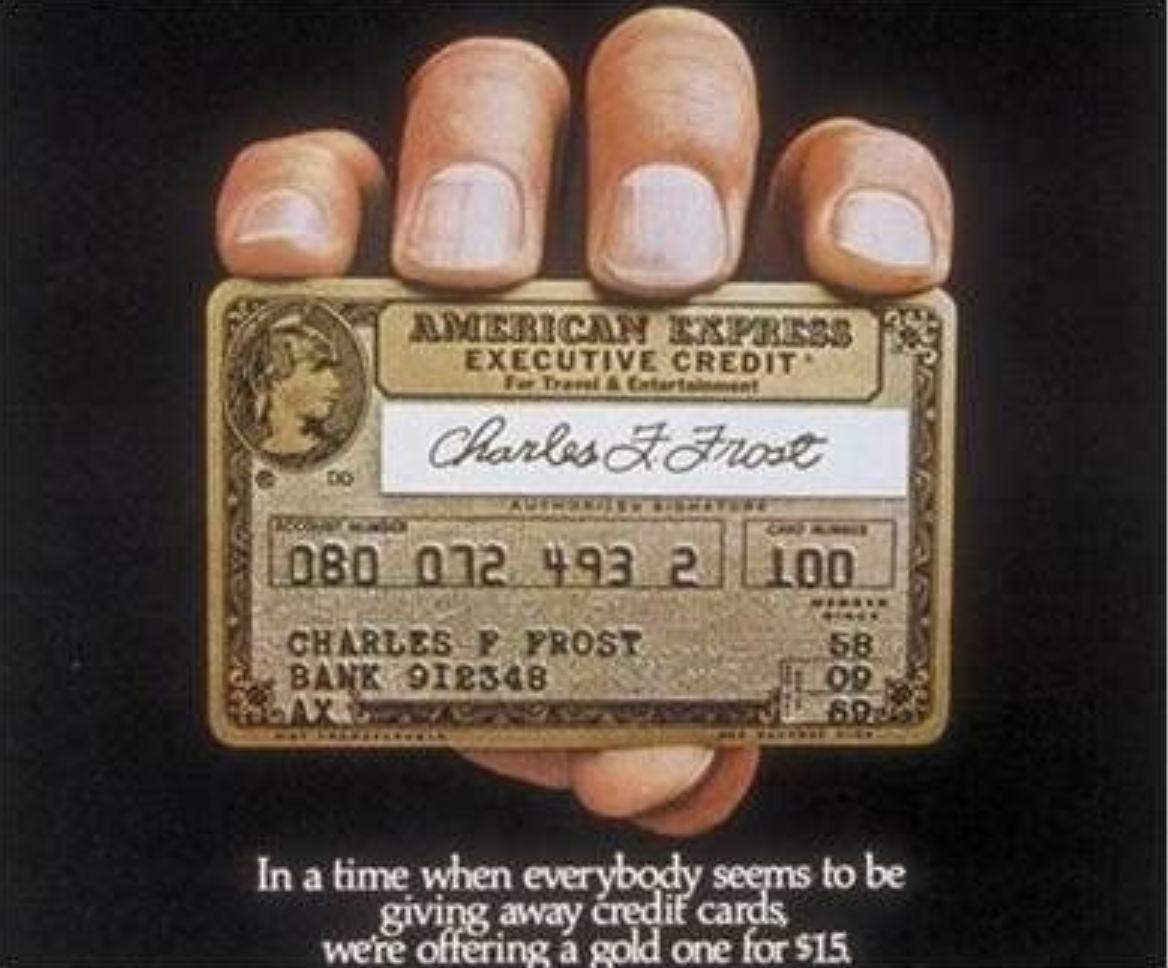 On March 18th, 1960, the New York Times published their first piece ever on credit card fraud and it announced the arrest of an elegant swindler.  He was described as “a man sporting a broad British accent, a silver-handled cane, and sundry disguises.”

When arrested, he sported a dapper look, wearing a single white carnation on his coat.  He had impeccable taste and the British accent made him seem even more refined. 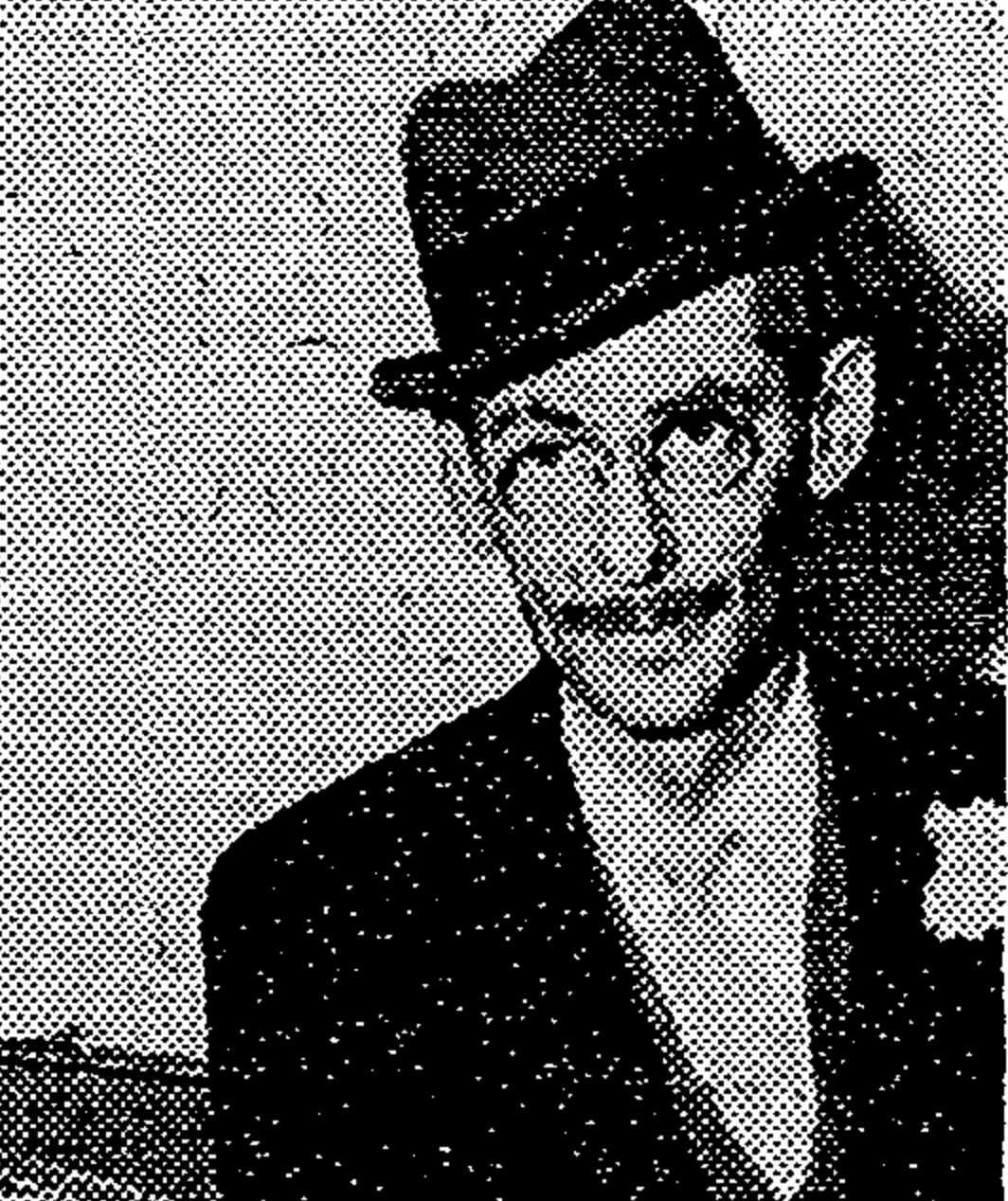 Charles Gregory Cannon in 1960 upon his arrest

This is is the story of Charles Gregory Cannon.  An elegant swindler.  A man that lived like a millionaire, spending on average $80,000 a month (in today’s money) on fancy meals, hotels and travel.  A man that had been sent to the insane asylum 10 years earlier but conned his way out by fooling the doctors.  A man that never stopped fooling people after he left.

The elegant Charles Gregory Cannon, who has been living it up the rate of $10,000 a month and sporting a broad British accent, a silver-handled cane, and sundry disguises, met some agents of the Federal Bureau of Investigation yesterday.

In Cannon’s luxurious suite in a midtown hotel, the FBI agents found a portable printing press, a check-writer, and other elaborate equipment.  The Dandyish, 35-year-old Cannon had used these devices the authorities said to print his own credit cards, checks and selective service cards for identification purposes.

Since last November, Cannon has traveled extensively throughout the northeast and Canada.  He estimated for David P Bicks assistant United States attorney that he had cashed the $20,000 in fraudulent checks and spent another $20,000 in hotels, restaurants with his bogus credit cards.

During this period, Cannon slept well and ate expensively – at least $25 daily for dinner. (For your reference that would be approximately $200 in todays money)

The FBI said Cannon was an escaped convict who had served a number of prison terms in various crimes.  Specifically, he was charged with being a fugitive from Jacksonville Florida where he was charged with passing bad checks, but the government said that was only part of the story.

In court, Bicks said that Cannon had obtained the funds to purchase printing equipment passing about $2,000 worth of counterfeit checks here early in 1959.  He then went to Florida where he was arrested last September and sent to prison for illegal use of a credit card. 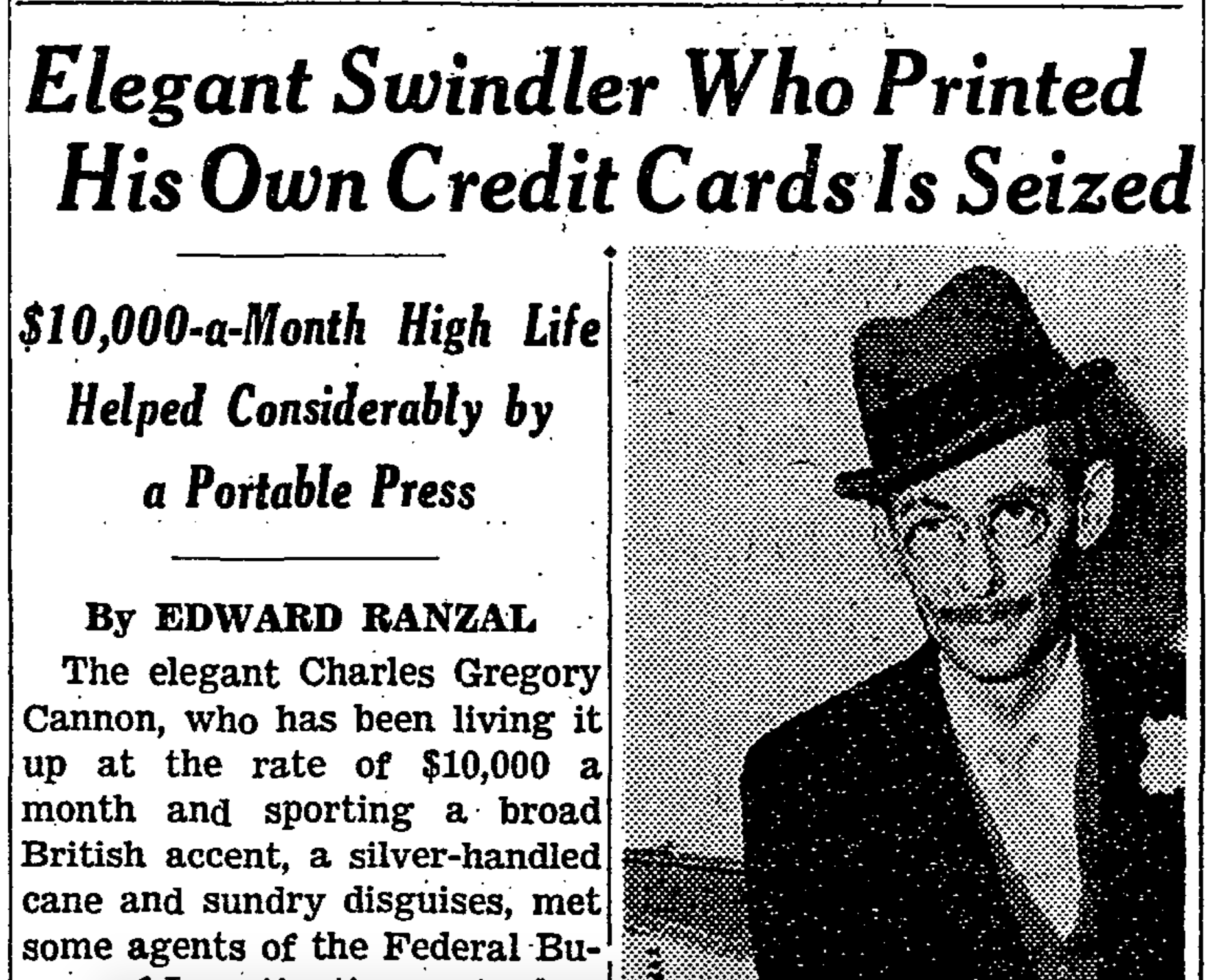 Cannon arrived in New York last December, Mr Bicks said, and assumed many names and used disguises included a wig while he passed a number of bad checks.

From New York, Cannon traveled to Canada where he opened an advertising agency that last 3 weeks.  Frustrated by his attempt to earn an honest living. Cannon returned to New York and his old ways.

Mr Bicks asked the United States Commissioner to hold Cannon on $50,000 bail pending removal to Jacksonville for a hearing. 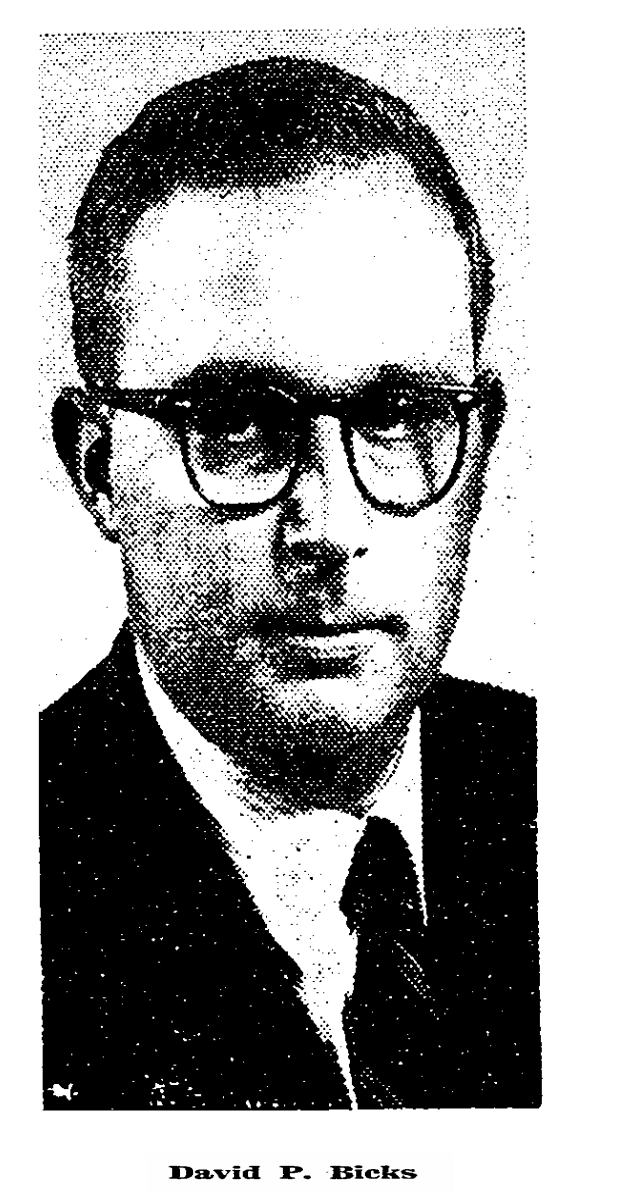 The prosecutor that brought down the dandy swindler Charles Gregory Cannon

Asked if he wanted to say anything pertaining to his bail, Cannon delicately holding his cane and gray homburg said softly, “I prefer to waive bail.”

“You mean you cannot make bail?”, the commissioner asked.

Looking owlishly from behind his dark, horn-rimmed glasses, Cannon smoothed his gray vest, brushed imaginary lint from his dark jacket and said:  “Precisely.”

When the commissioner said that the defendant was entitled to be represented by counsel, Cannon answered that he would defend himself by saying, “I will act pro se”

As he was lead to the detention cells in the Federal Court House Cannon turned and looked benignly at Mr. Bicks.  He seemed satisfied that bail of $5,000 had been set.

What Became of Charles Cannon?

Charles Gregory Cannon actually went on to live until 1997 and died when he was 77 years old.  As for his credit card and check forgery case, he pled guilty and was convicted but he later claimed that he was insane at the time of his sentencing and appealed his verdict.

It went to the second circuit board of appeals but he lost his case and was forced to do his time.

And that is the case of the first credit card fraudster – Charles Gregory Cannon.