The 2016 Internet Crimes Report has just been released and it provides eye-opening analysis of how you might become a victim of fraud.

Each year the FBI compiles statistics on all internet crimes reported by Americans and creates the Internet Crimes Report.  It is the best indication of how Americans are being conned by crooks, thieves, and liars.

As you can see, Americans are being ripped off more now, than ever before.  This is yet another proof point that fraud is continuing it’s epic rise upward as the world becomes more connected on the internet. 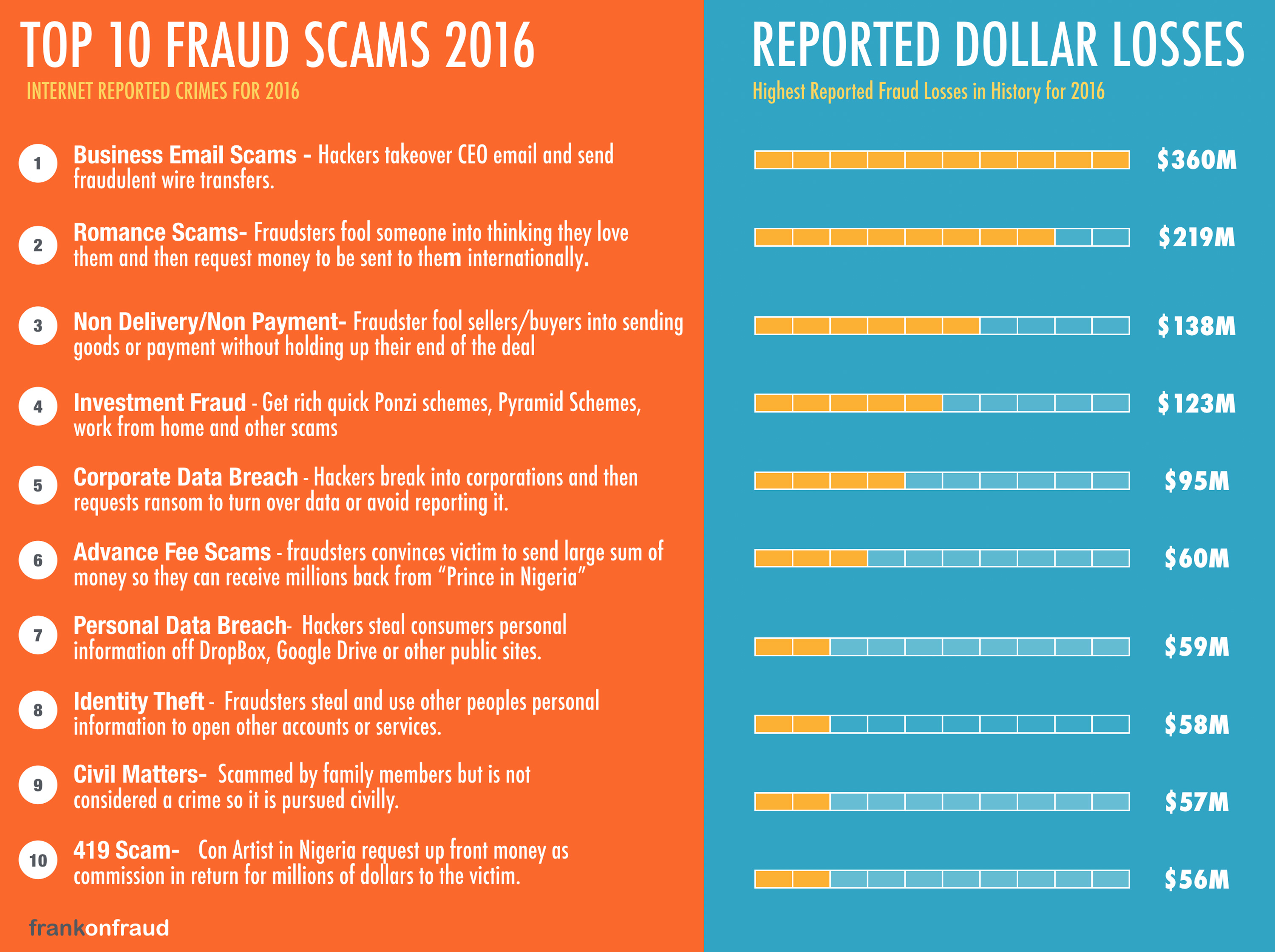 CEO Email Compromise is a scam targeting businesses but also consumers as well. These sophisticated scams are carried out by fraudsters compromising executives email accounts through social engineering and then requesting fraudulent wire transfers to foreign companies.

You can read this story here about Leoni AG who was scammed out of $44 million dollars through this scheme.

What people won’t do for love.  And fraudsters know it.  Groups operating out of Nigeria and other foreign countries are scamming Americans of hundreds of millions of dollars.  You can read a story about Amy – She was scammed by a clever fraudster out of Nigeria and lost $300,000 life savings.  She met him on Match.com.

If you answer yes to these questions from RomanceScams.org, you might be a victim.

#3 – Non-Payment or Non-Delivery of Merchandise

Internet auction sites like Ebay are fueling the rise of non-payment or non-delivery of goods.   Unsuspecting buyers are sellers are often conned into paying money or shipping goods while the other party are just clever scammers.

Facebook marketplace launched last year and already is taken off as a hotbed of fraud and scams. And thanks to all the new payment options that make getting and receiving money nearly instantaneously.  This type of fraud is only guaranteed to grow exponentially over the next few years.

If something is too good to be true, it often is.  Scammy get rich quick schemes are alive and well on the internet and reeking havoc with good honest Americans.  Read Steve’s story of how this kind elderly man lost over $200,000 to investment scammers on the internet.

Corporate Data Breaches have also reached their worst point in history.   There were 1,792 data breaches totaling over 1.4 Billion records.  That was an 86% increase over 2015 and it helped to fuel the rising tide of fraud in all categories.

If you have ever received a fax, a letter or email advising that you might receive a windfall of money if you pay “taxes” or an “application fee” you have likely been a victim of advance fee fraud.  By promising something too good to be true to the victim in return for a relatively small amount of money, fraudsters were able to collect over $60 million in stolen funds from American consumers.

Consumers were just as likely to become victims as data breaches as corporations.  In fact, many times consumers are even more likely as they have less protections over their personal data which may reside on DropBox or Google Drive with flimsy passwords.

The FBI numbers appear to susbtantially underestimate this type of fraud which by all indications is growing each and every year as data breaches become more and more commonplace.

If you think you cannot be scammed by someone you love or a family member, think again. One of the top reported matters to the FBI is being scammed by a relative or family member.  In many cases, these matters cannot be pursued criminally so the FBI refers to them as “Civil Matters.”

The 419 scam is another variant of advance fee scams but is referred to as the 419 scam as it often originates out of Nigeria.  This type of scam has been around for years and yet it still manages to work.  Thousands of Americans still get scammed by these fraudsters out of Nigeria.