How a Bad Suit Led to My First Job in Fraud 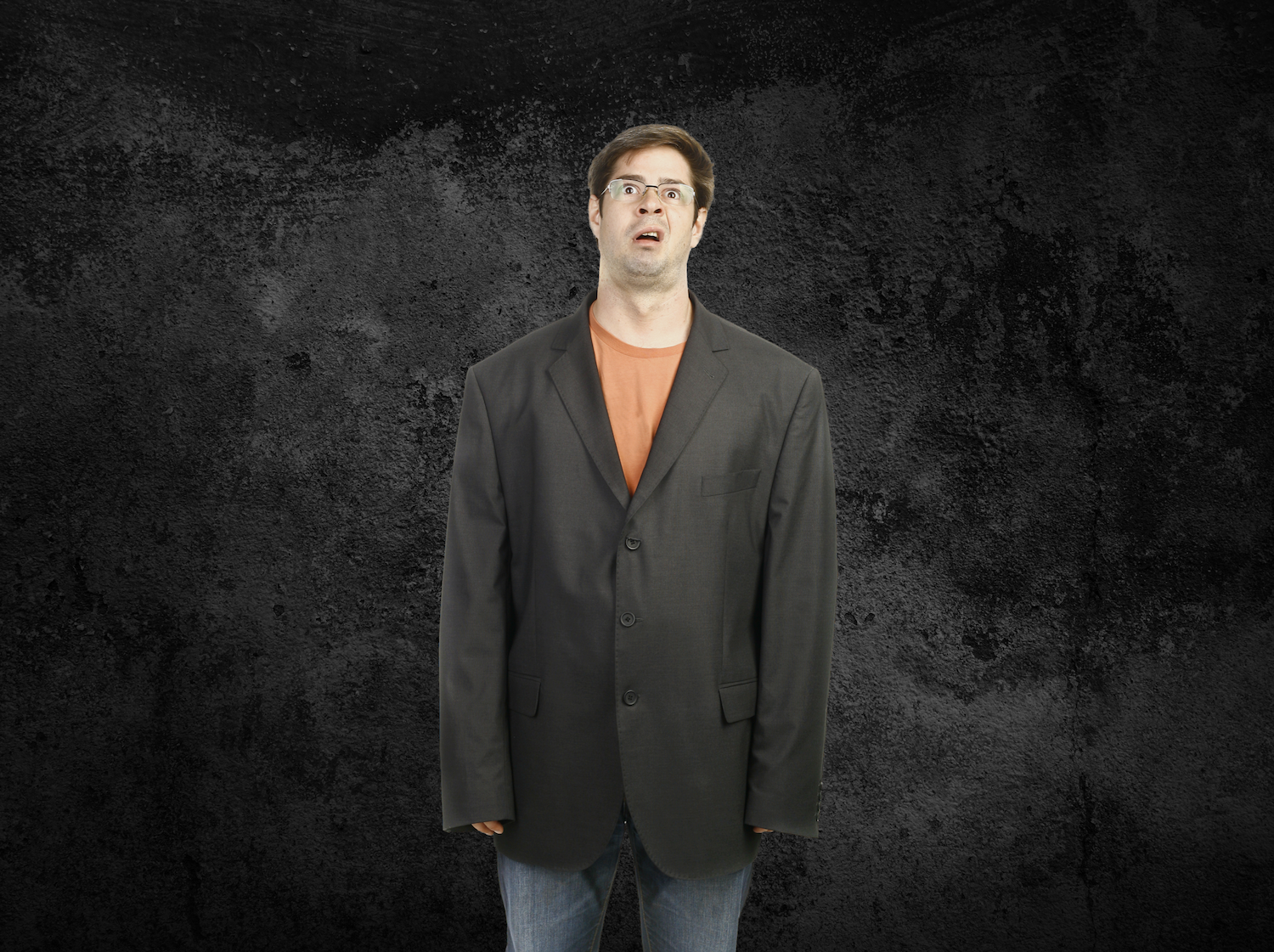 Thank God for bad suits.  Sometimes they can lead to really incredible things.

Well, that’s how I look at it anyway.  This is a story of how a bad suit led to a bad job interview which caused me to get rejected for a job that eventually helped me realize my dream. –  A job in fraud.

It was 1991.  I was fresh out of college and had just returned from a year of traveling from the top of Mexico to the bottom of Peru by bus and then back again.  I had done it on a shoestring; spending no more than $2 each day on housing, transportation & food.

And boy was I skinny after that trip. I lost 30 pounds, by eating only tortillas and rice.  You can’t eat or live very well traveling on that tight of a budget.  And I learned that the hard way –  by the end of the trip I only weighed 130 pounds.

And by the end of that trip, I needed something else. I needed a job.  I was almost flat broke. I couldn’t afford an apartment. I had to live out of my car.  Life was rough.

I was desperate.  I needed a job fast.  I was determined I was going to do whatever it takes to get one.

Back in those days, there was no internet.  So you would look for a job by going to the classified ads and submitting your resume by mail or calling a phone number.

So that’s what I did.  I applied for anything and everything I could find – Claims Adjuster, Mail Room Clerk, Entry Level Analyst, Customer Service Representative, Administrative Assistant.   Any job. You name it, I would send out a letter or make a call and beg for that job.

After a few weeks and hundreds of calls and letters later. One company called me back – Liberty Mutual Insurance Company.   The lady on the other side of the phone said, “we’re interested in interviewing you for a job as a claims adjuster.  Are you interested?”.

My heart was pounding.  I tried to maintain my composure but I only managed to squeak out an answer, “Of course I am mam.”

“Great” she replied, “Please come by our offices next Monday at 10 am for an interview.”

I hung up the phone. I was so excited. I couldn’t believe I was going to get the chance to get a real job.   I was a grown-up now, doing grown-up things.

I have never been so excited about a job as I was for that one.  I imagined myself sitting at a desk answering calls and working at a computer.  Since I had never had a real office job, I felt like it was going to be my ticket to happiness and wealth.

What About Your Suit?

I called my brother so excited about the interview.  I asked him how I should prepare.  We talked about what the job would entail and he helped me prepare good answers.  I felt like I was going to be able to nail the interview.  He was a claims adjuster himself so I had the inside scoop.

I was feeling good and was ready to say goodbye and he interrupted me and said, “What about your suit?  Do you have a suit?”.

I stopped. My heart sank.  NO!  I do not have a suit.   I don’t own a suit.  I don’t even know where to get a suit.  The last time I had worn a suit was in 8th grade for graduation.  And it was a pretty ugly suit that would never fit me now.

My heart sank. I was going to need to get a suit.  And I didn’t have much money.   I was a nervous wreck now.  What was I going to do?

After a few days, I knew I had to go out and get the suit or I would probably never get the job.

I managed to scrape together $75 and went out to the mall to try to find a suit. I went to every store I could think of.   I looked high and low trying to find something in my budget.

But everything was way, way more than I could afford.  The cheapest suits I could find were $300!  I could never afford that.

I was getting depressed.  I was about ready to call the lady at Liberty Mutual to cancel my interview when I saw a store called “Men’s Warehouse” and it looked like it was chocked full of suits.  I decided to check it out.

I walked in and immediately a sharply dressed guy approached me., “What can I do for you Sir?”

I couldn’t believe he called me “Sir” since I felt like I was still a kid.  I told him I was looking for a suit.  He took me to the rack that had my size and my heart sank as I looked at the prices.  The suits were nice, but they were all hundreds of dollars and I would never be able to pay for them.

I said to him, “What do you have for $75?”  He gave me a bit of a surprised look and took me to a derelict rack in the back of the store with a few drabby suits that looked really dusty.  “This is it buddy,” he said to me.

Great. now I was “buddy”.  Instead of “Sir”, I was now “Buddy”.  When he figured out how poor I was he viewed me very differently.

Well, it turns out there were only 1 of those dusty drab suits that fit me.  It was bright blue.  It was made of nylon.  It was extra baggy on me since I weighed practically nothing.  And it was dusty.  I mean it was the ugliest suit I have ever seen.

But I ended up buying that ugly suit because it was all that I could afford.  I couldn’t even afford to tailor it. The suit and I were partners now – partners in trying to get me a job at all cost.   We were going to go to the interview together and try to land the job.

Strange Looks and An Awkward Interview

It was interview day.  I got up way too early and got dressed in that horrible suit. I looked in the mirror and was so ashamed.  “Look how dumb I look in this suit!” I thought to myself.

I drove to Liberty Mutual and arrived way too early and sat in the parking lot for 45 minutes waiting for 10:00 am.   My heart was pounding.  I was a bundle of nerves.  I was sweating so my shirt was getting soaked with sweat.   Things were not shaping up for a good first impression.

When the time came I walked into the building and asked for the HR lady.  About 5 minutes later, I hear the door open and a friendly-looking lady comes out and greets me extending her hand.

I extended my sweaty cold hand out to her and said “Hello Mam”.  She immediately looked up and down at me when I stood up and her eyes indicated to me that she was not impressed.  Or maybe I was making it up but I immediately felt awkward.

When we walked through the hallway to get to her office, I noticed all the employees glancing at me and giving me weird looks.  It felt like a walk of shame.

We went into her office and she started asking questions. I  did my best to answer the questions but I was so flustered and self-conscious, I guess I messed the interview up something bad.

Thankfully, she cut the interview short and let me be on my way.  I felt the tears welling up inside as I stepped outside the building. What a failure I was.

I drove home and threw the bad suit in the trash.   It took me a long time to get over that bad interview and regain my confidence to start interviewing again.  I eventually did but I was determined to do it right next time with a GOOD suit – even if it cost me $300.

6 Months Later I was Working in Fraud

Needless to say that ugly suit, and that bad interview, eventually lead to my dream job.   6 months after that interview, I got an interview with a bank.  They initially offered me a job in customer service which I took.

Within 3 months of taking that job, they promoted me to a job in the fraud department.  When I got that job in fraud, I knew I had achieved my dream.  I knew that I had the best job ever. And I didn’t even have to wear a suit to get the job.

I think back to myself and in retrospect, I am so glad that I never got that claims adjuster job.

Would I have been happy being a claims adjuster? Probably not.  Was I happy working in fraud?  Absolutely.  Looking back I am so glad I was rejected for that job, because if I was accepted, I may have never gotten that first job in fraud.  And that makes me very happy.

Maybe the job in fraud didn’t pay as much.  But I tell you what, it was the happiest I have ever been when I was fighting fraud.

So just this week, I was thinking back to that failed interview and back to that horrible suit.  I thought to myself, “Thank God for bad suits, sometimes they lead to really incredible things”.  It brought me here.

And that’s my story.  Thanks for reading.